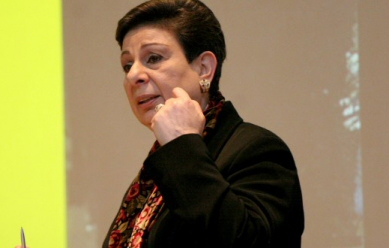 These comments were made following a meeting Dr. Ashrawi had with French Consul General Hervé Magro earlier today at the PLO Headquarters in Ramallah.

PNN reports that both parties addressed current French ideas and initiatives and the gravity of the situation in Palestine, both in terms of Israel’s violations and escalations and the internal rift and the need for serious reconciliation. Given the current deteriorating situation on the ground, Dr. Ashrawi stressed the need for serious international commitments and steps.

In addition to discussing issues of mutual concern and cooperation, Dr. Ashrawi and Mr. Magro reviewed Dr. Ashrawi’s recent participation in a meeting in Paris. Sponsored by the French Ministry of Foreign Affairs, the UN Department of Political Affairs and UNESCO, the meeting dealt with regional issues.

On a separate note, Ashrawi addressed the UNRWA crisis as a global responsibility, since the United Nations Relief and Works Agency (UNRWA) is experiencing the worst financial crisis in its sixty-five year history.

“Such a crisis is the result of grave financial burdens exacerbated by Israel’s inhumane acts of aggression and siege on Gaza and the tragic circumstances that have befallen the Palestinian refugees in Syria,” Ashrawi said.

“UNRWA’s ability to provide basic services to the refugees is greatly threatened and the start of the school year is in grave jeopardy, affecting roughly half a million students in 700 schools in the West Bank and Gaza Strip,” she added.

Ashrawi confirmed that the crisis requires the immediate attention of the international community, and we call on the donor states and all members of the UN to shoulder their responsibilities towards Palestinian refugees and provide the necessary support and financial assistance to UNRWA.

UNRWA was established by United Nations General Assembly (UNGA) resolution 302 (IV) of December 8, 1949 in the aftermath of al-Nakba to deal with the major humanitarian disaster as a result of the uprooting and expulsion of the Palestinian people at the creation of the State of Israel. Launching its operations on May 1, 1950, UNRWA was the sole institution established to deal with Palestinian refugees only.

Sixty-five years later, it counts as a lifeline for millions of Palestinian refugees residing in Occupied Palestine, Jordan, Lebanon, and Syria, providing them with vital services, support and opportunities for work, growth and development.

“UNRWA has given the refugees a sense of hope and has contributed effectively to regional stability. Any developments that threaten the continuity and scope of UNRWA’s mandate and responsibilities threaten to destabilize the whole region,” said Ashrawi.

“Palestinian refugees have suffered for far too long, and it is time that their plight is recognized by the international community and resolved in accordance with international law and conventions, particularly by implementing UNGA resolution 194. Until then, it is crucial that UNRWA is provided with the support it needs to fulfill its mandate,” she concluded.