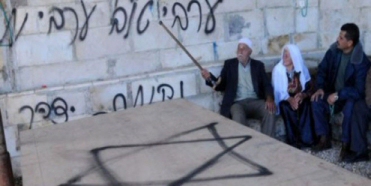 Israeli Jewish settlers last night attacked Palestinian homes with stones as they provocatively approached the outskirts of Silat ad-Daher, some 20 kilometers to the south of Jenin in northern West Bank, security sources told WAFA.The settlers, who also chanted racist slogans against Arabs and Palestinians, provoked a scuffle with angry local Palestinians who forced them out of the area.

The village is close to what was known as Homesh and Sa-Nur, two Israeli settlements which were evicted after Israel‚Äôs unilateral disengagement from Gaza and four other settlements and a military base in northern West Bank in 2005.

On July 30, some 200 settlers organized an overnight hike to the former settlement in an attempt to resettle there before they were forced to leave by the Israeli army. According to Israeli media, among those who attempted to reoccupy the former settlement were families who were evicted in 2005 as well as rabbis, public figures, and MK Bezalel Smotrich from the nationalist Jewish Home party.

During the settlers‚Äô provocative visit to Sa-Nur, which is adjacent to Nablus-Jenin highway, settlers assaulted passing Palestinian vehicles with stones and provoked tension in the area.

Meanwhile last night, settlers entered the village of Hares near the town of Salfit, in central West Bank, and pelted Palestinian homes with stones before local Palestinians gathered in an attempt to confront them.

According to local sources, the settlers had also some Molotov cocktails on their possession, which means they were plotting a malicious act. But after locals attempted to confront them, an Israeli army force arrived in the scene and ordered the settlers out of the area.

Violence by illegal Jewish settlers is commonplace. They have repeatedly attacked Palestinian property and worship places. Settler violence includes property and mosque arsons, stone-throwing, uprooting of crops and olive trees, attacks on vulnerable homes, among others.

Only last Friday, a group of Jewish fanatics killed an 18-month-old Palestinian baby and seriously injured his entire family, during a predawn arson attack which targeted two homes in the village of Douma, south of Nablus.

The baby‚Äôs father, Sa‚Äôad Dawabsha, his mother Riham and his 4-year-old brother, Ahmad, sustained third degree burns and were transferred to several hospitals in the city of Nablus to receive immediate medical care.

In related news, the PNN reports that extremist Israeli settlers, on Wednesday morning, have sprayed hate slogans on walls of homes and shops near Damascus gate in East Jerusalem, calling for ‚ÄúDeath of Arabs.‚ÄĚ Jerusalem sources said that such groups have often targeted not only houses and shops, but also mosques and churches in Jerusalem, in addition to repetitive arson attacks. None of the attackers were sanctioned by Israeli government.

For their part, Israeli occupation authorities claimed to have opened an investigation in the matter, but Jerusalem locals assured that these investigations are never taken seriously.

They added that, if detained, the attackers are released under the claim that they have mental-issues. Despite the numerous attacks on Islamic and christian sanctuaries, none of the extremist Jewish settlers is held accountable for their crimes.

In a related matter, Israeli occupation police, Wednesday morning, stated they were not able to identify the settler who torched home of 18-month-old Ali Saad Dawabsha, who was burned to death in the attack. The police asked for help from the people to hand any information they have on the case.

The crime of burning alive the toddler Dawabsha, was faced by Israeli condemnations and a 6-month administrative detention order for one extremist suspect. The detainee is also suspected to have participated in the burning of the Church of Loaves and Fishes in Tiberias.

Israeli police, as well, arrested far-right activist Meir Ettinger, but he has not been named as a suspect in the attack yet, reported i24.

Ettinger, whose grandfather Meir Kahane founded the racist anti-Arab movement Kach, was arrested on Monday ‚Äúbecause of his activities in a Jewish extremist organization,‚ÄĚ a spokesman for the Shin Bet internal security service told AFP.

The court prolonged the incarceration of Meir Ettinger until at least Sunday, according to judicial sources.