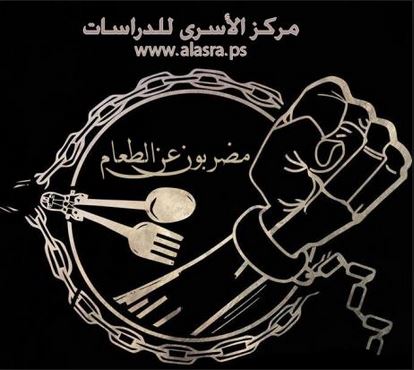 The head of the Palestinian Detainees’ Committee Issa Qaraqe has reported that 32 Palestinian detainees, held by Israel, have joined the hunger strike, and that the current number of striking detainees is 180, while dozens are expected to join.Qaraqe said all meetings between the detainees and the Israeli Prison Authority have failed, while Israel vowed to escalate its violations against them should they continue, or expand the strike.

He added that 32 detainees, members of the Islamic Jihad, have joined the hunger strike in Nafha and Ramon Israeli prisons, on Sunday evening, and that the current number of striking detainees have arrived to 180.

On Sunday morning, the number of striking detainees reached 148, after the Israeli Prison Authority refused to listen to the detainees’ demands, and decided to impose further restrictions on them.

Among the striking detainees are 120 members of the Fateh movement, held in Nafha; they started their strike five days ago, in addition to 26 detainees, members of Fateh, the Islamic Jihad, the Popular Front for the Liberation of Palestine (PFLP) and the Democratic Front for the Liberation of Palestine (DFLP) held in Ramon prison, and joined the strike Sunday. Two detainees, held in Eshil Israeli Prison, have also joined the strike on Saturday.

The Palestinian Prisoners Society (PPS) has reported that all negotiation sessions between detained representatives, and the prison administration, have failed to lead to any positive outcome, especially since Israel is vowing escalation, rejecting to ease its restrictions, and is ongoing with violations against the detainees.

After Doctors In Soroka Refused Force-Feeding, Allan To Be Moved To Barzilai