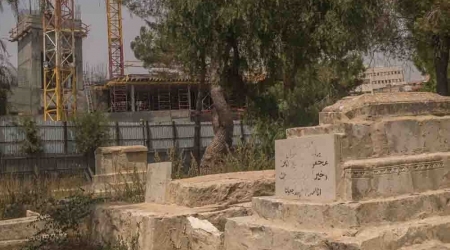 A recently opened cafe in West Jerusalem, which is built on a park that Muslims say is the site of an ancient cemetery, is drawing outrage from religious leaders in the Holy City.The Al-Aqsa Association, a group which advocates for protecting the sanctity of the Al-Aqsa Mosque and other holy sites in Jerusalem, released a statement after the cafe opened earlier this month, calling the move part of a ‘systematic scheme to destroy the landmarks of the cemetery’.

‘This is a sanctified location, a holy place for Muslims, and it’s been a cemetery for 1,400 years. It’s impossible to treat a holy place like this,’ Amir al-Khateeb, the director of the organisation, told Al Jazeera.

Al Ray further reports that representatives of the Landwar Coffee chain, to which the cafe belongs, were unavailable for comment.

Mamilla Cemetery is believed to date back to the seventh century, and it houses the remains of many important figures from the early days of Islam, including companions of the Prophet Mohammed.

It is also the resting place of many combatants from the Crusades, both Muslim and Christian.
Burials in Mamilla continued until 1948, when forces from the newly declared State of Israel occupied West Jerusalem.

In 1986, the Israeli government told the United Nations Education, Scientific and Cultural Organisation (UNESCO) that ‘no project exists for the deconsecration of the site and that, on the contrary, the site and its tombs are to be safeguarded’, in response to a UNESCO investigation of Israel’s development projects on Mamilla.

However, the current government seems to be taking a different stance. Khateeb asserts that of the 20 hectares of land that belong to the historical location, only two hectares are still visible as part of the cemetery.
‘They have built a hotel, a garden, a pool, and now the cafe – all on top of graves,’ Khateeb said.

Adding to the Al-Aqsa Association’s outrage, the cafe also serves beer and wine, which is forbidden by the majority of Islamic adherents.

The Muslim community has been rallying for the continued respect of the site since 1948. But Khateeb said the boiling point came in 2005, when the Los Angeles-based Simon Wiesenthal Center (SWC) announced plans to build a ‘Museum of Tolerance’, set to open in 2017, on top of the cemetery.

The museum will aim to combat racism and prejudice by examining historical examples of discrimination, with a strong emphasis on the sufferings of Ashkenazi Jews under Nazi Germany.

‘Considering the toll [the Museum of Tolerance] has had on our cultural heritage, it is absurd that they would name the museum in such a way,’ Khateeb said.

Since 2010, the Center for Constitutional Rights (CCR), a legal advocacy organisation based in New York that works on issues such as Muslim profiling and Israeli discrimination against Palestinians, has overseen a campaign to protect Mamilla.

CCR said the construction of the Museum of Tolerance ‘has resulted in the disinterment of hundreds of graves, and the whereabouts of the countless human remains that have been disposed of are unknown’.

In response to an Al-Aqsa Association petition to halt construction of the museum, the Israeli Supreme Court decided in 2008 that the cemetery had been abandoned for decades, thereby losing its sanctity.

It also ruled that continued construction could be allowed because the site of the museum had been a car park for nearly 50 years. SWC cites this decision to combat criticism.

But CCR and Khateeb disagree. Both say that Mamilla was always important to the Muslim community, and Khateeb maintains they have been protesting against construction on the site for decades, to no avail.
Neither SWC nor the Jerusalem municipality were available to comment by press time.

Nadim Nashif, the director of the Haifa-based Baladna Association for Arab Youth, told Al Jazeera that the Mamilla Cemetery issue resonates across all sectors of Israel’s Palestinian community, who comprise 20 percent of the population.

‘It doesn’t matter where you go in this country, Israel is thoroughly trying to remove the historical evidence of Palestine, and broadly, [all Palestinian citizens of Israel] feel alienated,’ Nashif said.

Baladna endeavours to reinforce the national identity of Palestinian citizens of Israel by educating Palestinian youth on their culture and past.

Nashif feels that this work is growing more and more important, as Palestinian structures across present-day Israel continue to be demolished.

‘The erasure of Palestine has been a tactic of the Israeli government from day one. It holds no respect for history, and what has been happening in the Mamilla Cemetery proves this,’ Nashif said.

Back at the cafe, located near the future Museum of Tolerance and across the road from some of the few gravestones still visible in the cemetery, Israeli patrons flocked on a recent afternoon to partake of the cafe’s fare. Many told Al Jazeera they were unaware that they were dining on top of a contentious site.

Moshe Levin, a 22-year-old university student enjoying a beer and fried halloumi cheese, said he ‘didn’t know Independence Park was a cemetery. It’s always been a park for me’.

When asked if this information changed his view of the space, he replied: ‘No, not really. The park is beautiful and if people can enjoy it, I don’t see the problem.’

Meanwhile, Khateeb has vowed to ‘arrange a demonstration with the relatives of those who are buried in the cemetery, to bring the world’s attention to what is happening here’.

He also plans to send letters of complaint to international and Israeli authorities, which he said are required by their own laws to respect holy sites. The Israeli government has laws in place, including the Protection of Holy Places Law and Section 170 of the Penal Law, which forbid the desecration or demolition of any place held sacred to any religion.

Khateeb added that it is not only a legal matter, but one of common decency.

‘Today, Jewish cemeteries all over the world are well-maintained. If someone defaces even one of the graves, it’s a huge matter that is quickly resolved,’ he said.

‘We want the Israeli government to treat all holy places – whether Muslim, Christian, or Jewish – as equal.’