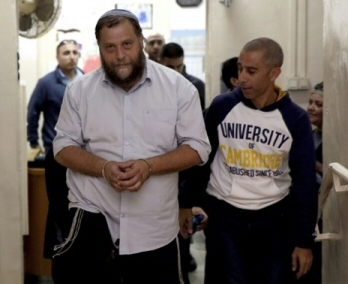 Israel police questioned and freed, on Tuesday, a Jewish extremist leader who condoned torching churches amid an uproar over recent attacks carried out by Israeli settlers, including the deadly firebombing of a Palestinian home.Benzi Gopstein, who heads far-right group Lehava, has not been linked to any recent attacks, but his comments regarding churches came at a time of heightened sensitivity over Jewish extremism and drew outrage from Roman Catholic officials.

Israeli police spokesperson Luba Samri said Gopstein had been called in for questioning ‘about his comments regarding the burning of churches.’

He was later allowed to go free, she added.

During a debate with religious students last week, Gopstein defended the idea of burning churches, reportedly invoking a medieval Jewish commandment to destroy places of idol-worship, according to a widely broadcast recording of the event.

A formal complaint to Israeli Attorney General Yehuda Weinstein was later filed by the body in charge of Catholic properties in the Holy Land.

In a letter seen by AFP Monday, the Custodian of the Holy Land called for Gopstein to be prosecuted and for Lehava to be outlawed.

‘To our utter dismay, recent years have witnessed an alarming and frightening increase in violent attacks against Christians, Christianity and Christian institutions in Israel,’ the letter said, denouncing an ‘atmosphere of de facto impunity,’ the letter read.

Gopstein’s lawyer Itamar Ben Gvir, speaking on public radio, said ‘our client has been summoned to interrogation in the wake of pressure from the Vatican.’

‘I ask myself what the next step will be. Will the pope decide to file charges?’

Gopstein, who lives in the flashpoint occupied West Bank city of Hebron, has previously faced police questioning. He was one of 10 Lehava members detained last year over an arson attack on a mixed Jewish and Palestinian school in Jerusalem.

Lehava claims to fight for Jewish identity, in particular by opposing marriages between Jews and non-Jews.
Gopstein’s summons Tuesday followed attacks, attributed to Jewish extremists, on Palestinians and Christian holy sites in Israel and the occupied Palestinian territories.

A Palestinian 18-month-old Ali Dawabsha was burned alive and his father was fatally injured when alleged Jewish extremists firebombed their home at the end of last month.

On June 18, an arson attack occurred at a shrine on the shores of the Sea of Galilee in northern Israel where Jesus is believed to have performed the miracle of loaves and fishes.

While Israeli prosecutors have charged three Israeli extremists in the Sea of Galilea arson attack, officials reported Monday that all suspects detained in a probe into the deadly attack on the Dawabsha home had been released.

The suspects had been detained during raids in Jewish outposts nearby the family’s village.

While Israeli Prime Minister Benjamin Netanyahu labelled the arson attack as ‘terrorism’ and pledged to use all legal means to track down the perpetrators, critics argue the legal system is not capable of properly prosecuting Israeli settlers.

Palestinian leadership and rights groups say that Israeli government policies — including support for settlement expansion and frequent impunity for settlers — allow such attacks to take place.