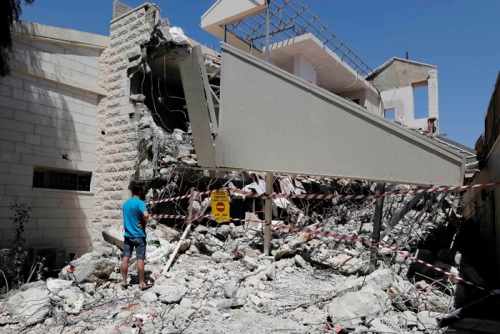 Israeli soldiers demolish, on Tuesday morning and on Monday at night, a number of residential and agricultural structures, and barns, near the al-Hamra military roadblock, and in al-Jiftlik, Zbeidat, Froush Beit Dajan and Hamsa, in the West Banks’ Central Plains.The WAFA News Agency has reported that the army demolished residential structures belonging to resident Mahmoud Bsharat, who said that the soldiers only handed him the demolition notices, on Monday, informing him “he has ten days to evict before the destruction takes place.”

Bsharat said this is the third time the soldiers demolish his residential structures since 1996, and that some were built before the 1967 six-day war, when Israel occupied the rest of Palestine.

‘My family will never give up; we will never surrender,’ he stated, ‘We will rebuild; this is our country, and here he will stay.’

Late on Monday at night, soldiers demolished several structures, used by street venders, near the al-Jalama Israeli military roadblock, north of the northern West Bank city of Jenin, as part of the Israeli plan to expand it.

The soldiers also demolished a small restaurant belonging to resident Fayez Sha’ban, and a garage owned by Sadeq Abu Faraj, after illegally confiscating their properties.

Soldiers also demolished several barns, and agricultural structures belonging to a number of residents in the Central Plains of the occupied West Bank.

Member of the Executive Committee of the Palestine Liberation Organization (PLO), the head of the Jerusalem Department Ahmad Qurea’, denounced the destruction of the Palestinian property, including the Tuesday morning demolition in Jerusalem, and said the latest violations ‘are part of Israel’s criminal polices that violate International Law, and all human rights treaties.’

Erekat added that Israel is openly challenging the International Community, by land theft, destruction of homes and property, and ethnic cleansing against the Palestinians, and is benefiting from the idleness of the world regarding its racist polices, especially its policies targeting the existence of the Palestinian in occupied Jerusalem.