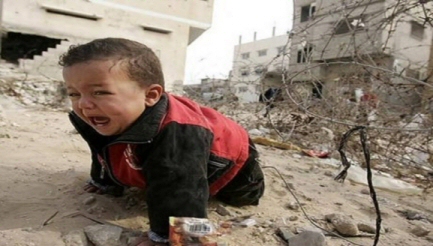 A United Nations Relief and Works Agency (UNRWA) report on Palestine’s Gaza Strip concludes that infant mortality has risen for the first time in decades. A significant marker for a dangerous trend says UNRWA Director of Health Dr. Akihiro Seita. Infant mortality is but one of numerous health and mental health indicators, suggesting that the tragic state of health in Palestine is an artifact of the blockade on Gaza, the occupation of the West Bank, and the lack of possibilities for Palestine to develop a sound economy. A conversation with UNRWA Director of Health Dr. Akihiro Seita:

Palestine_Gaza_Child_NEOInfant mortality in the Gaza Strip has fallen from 167 per 1,000 life birth during the 60s to 20.2 in 2008. The latest UNRWA report from 2013, however, shows that infant mortality has risen to 22.8 per 1,000 life birth. While the rise is not statistically significant, I asked Dr. Akihiro Seita why the UNRWA considers this rise as a dangerous marker.

Dr. Akihiro Seita stressed that it is correct that the increase is not statistically significant but that a reverse in a trend of infant mortality is very rare. On an international level, said Dr. Seita, one can observe a reverse in the trend of infant mortality in conflict areas, like in Iraq, in the 1990s, adding that a kind of generalized conflict could be one of the causes, but even that is very rare. In other incidents an increase in infant mortality in children up to the age of one would for example be correlated to the outbreak of communicable diseases, but also that is very unusual.

The reason why the infant mortality rate also is an important indicator, said the UNRWA Director of Health, is that it does not merely reflect the level of primary medical care, but that it reflects the economic and other development of a society in general. This is one of the reasons that the rate has been included as one of the indicators in the millennium development goals, he added.

Considering the rise in congenital anomalies in Iraq, generally attributed to the use of Depleted Uranium munitions, I asked Dr. Akihiro Seita whether there were any studies, ongoing or planned, which would investigate whether there were correlations or causal relations between these anomalies and Israel’s use of Dense Inert Metal (DIME) or Depleted Uranium (DU) munitions in the Gaza Strip.

Dr. Akihiro Seita said he was aware of the use of these munitions; However, he said, the main cause that the UNRWA could identify was that reproduction was limited to a small genetic pool caused by the blockade on the Gaza Strip and the enforcement of restrictions on relocation that prevents Palestinians from the West Bank to marry a partner from distant towns and villages.

The situation results in a relatively high rate of marriages between close family relatives. Dr. Seita added that the UNRWA does not have any data about the eventual effects of Depleted Uranium and DIME munitions because the UNRWA is not in a position to measure the presence of ionizing isotopes and their eventual effects. We agreed that this would be that task of other UN agencies, including the WHO and the IAEA; or whatever other relevant agency or institutions that may have the capacity to do that work.

Dr. Seita said that the main cause of infant mortality, globally, was previously infections, diarrhea and communicable diseases, but this is not the case by any means now. The main causes, he added, are related to hospital and specialized hospital care. Dr. Seita noted that there clearly are issues related to resources, for example incubators for prematurely born infants at a weight below 1,000 gram.

Asked whether the blockade on Gaza was a direct contributing cause to these conditions, Dr. Seita said that this would be jumping to conclusion, but that the hospital sector in Gaza in general needs improvement, especially with regards to neonatal care. He added that the mortality in neonatal care, as compared to the general trend, was statistically significant.

The lower life expectancy of Palestinians, we concluded, could thus not be directly correlated to the blockade on Gaza and the occupation of the West Bank. Dr. Seita would, however, agree that the blockade and the decades-long occupation of Palestine makes it virtually impossible for Palestine to develop that very sound economy that would be required to remedy causes for the lower average life expectancy, or for that sake to improve hospital care, nutrition and so forth.

Asked what the UNRWA perceives as the most pressing health issues that the agency needs to address, Dr. Akihiro Seita said that the UNRWA only provides primary health-care and not hospital care. He stressed that the UNRWA is in a financial crisis and needs continuous financial support from donors and others. He noted that this was not only necessary for providing health-care for mother and child but also for patients with diabetes and hypertension which are major health problems in Palestine.

Sometimes it happens that deliveries of life-saving medicines are delayed, said Dr. Seita, adding that the import of medicines for UNRWA is usually going smoothly. The same cannot be said for, for example, Palestinian administrated hospitals and pharmacies in Palestine, especially in Gaza. Dr. Seita stressed that what was needed for Palestinians was good hospital care, quality care. Dr. Seita agrees that this development is dependent on a well-functioning economy, adding that the blockade on Gaza and the occupation of the West Bank are obstructing the economic development. That is, indirectly the blockade and the occupation are contributing to the rise in infant mortality and the lower average life expectancy.

With regards to specialist health care, Dr. Akihiro Seita notes that traveling restrictions that are being enforced on Palestinians also contribute to a relatively lower standard of specialist care. That is, Palestinian Medical Doctors cannot participate in symposium, conferences, as well as after-education to the extend that would be required to maintain the needed high professional standard. Again, this is a direct artifact of the blockade on Gaza, the occupation of the West Bank, and the failure to resolve the decades-long conflict.

Dr. Seita stressed that many incidents of diabetes in Gaza are caused due to the inability to have access to varied nutrition. The blockade on Gaza results in the disproportionate use of bread and foods rich in sugar. Thus, the blockade on the Gaza Strip may increase the risk of diabetes and contribute to the high rate of death from non-communicable, treatable diseases.

Another reason for the high prevalence of diabetes throughout Palestine is that the people generally are poor and that bread is one of the most affordable foods because it is government subsidized. It would be misleading to speak about malnutrition said Dr. Seita, because it could give the impression that people are starving or loosing weight. The issue, he added, is rather that the one-sided nourishment makes people prone to become obese and to develop diabetes.

The UNRWA Director of Health also stressed that there is a high prevalence of conflict-related psychosocial and mental health problems. Dr. Akihiro Seita added that the UNRWA has a psychosocial councilor in every health center and school. However, he said, the slow reconstruction of Gaza subsequent to the 2014 50-days war is permanently confronting those who are already suffering from psychological trauma with reminders of their traumatic experiences. One of the challenges with regard to children is to make them realize that the war is over. Returning to a sense of normality is, of course, difficult when the child is surrounded by ruins. He added that the psychological stress, of course, also has an impact on the physical health.

Dr. Seita noted that during the war, the UNRWA was asked what the agency does to alleviate the psychological stress. The agency, he said, is of course doing its best to provide the best possible care under the circumstances, adding that the best cure for conflict-related psychosocial and psychological stress is peace. Reflecting on the issue Dr. Seita said, of course we will continue to provide, but if there is no peace, what is the point, if I may ask.

Dr. Seita concluded that he has been at the UNRWA for almost five years and that he likes his work at the agency. That said, he added that he would be the first one to be happy if the agencies’ work became unnecessary and for that, he stressed, there is an urgent need for peace.

Dr. Christof Lehmann an independent political consultant on conflict and conflict resolution and the founder and editor in chief of nsnbc, exclusively for the online magazine “New Eastern Outlook”.