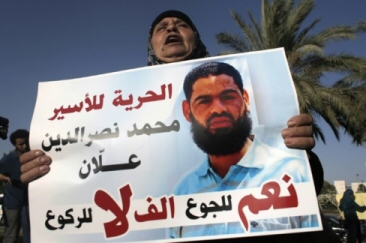 Israel’s High Court on Wednesday suspended a detention-without-trial order on hunger-striking Palestinian prisoner Muhammad Allan but said he must remain in hospital pending a decision on his future.’Due to the petitioner’s medical condition he will remain in intensive care,’ said the ruling, seen by AFP.

‘This means that for now, owing to the hunger striker’s medical condition, the administrative detention order is no longer operative.’

The court said that for now he should be treated like other hospital patients.

‘His family and friends will be able to visit him, not as a prisoner, subject to the usual medical instructions on visiting the sick,’ the ruling said.

‘After his condition stabilizes, if Allan asks to be moved to another hospital he is to apply to the authorities and in the case of difficulty or disagreement it will be possible to turn to the court,’ it added.

Earlier, an MRI scan revealed that Allan had suffered brain damage as a result of his hunger strike.
Israel’s High Court had said that if the hunger striker’s brain damage is irreversible, then, it is likely the administrative order will be completely revoked.

Over the past week, Allan has refused several offers put forward by Israel in return for an end to his protest action.

Allan’s lawyer Jamil al-Khatib told Ma’an, Saturday, that the detainee refused an Israeli offer to continue his administrative detention for a period of two years.

Israeli authorities, on Monday, had offered to free Allan if he leaves the country, which was rejected outright by his lawyer.

The hunger striker regained consciousness on Tuesday, after being in a coma more than four days, but pledged to resume fasting if Israel did not resolve his case within 24 hours.

Allan, who has been held in Israeli custody since last November, went on hunger strike to protest his administrative detention.