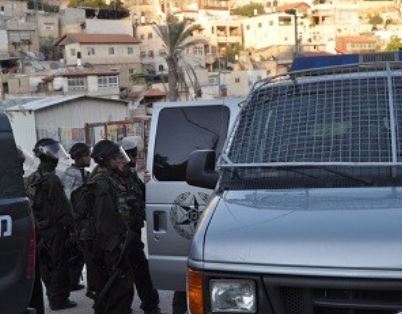 Israeli soldiers invaded several communities in the occupied West Bank, and kidnapped nine Palestinians, including three teenagers. Soldiers also attacked and wounded a Palestinian on a roadblock in the northern part of the West Bank.Media sources in Hebron, in the southern part of the West Bank, have reported that the soldiers invaded the al-‘Arroub refugee camp, north of the city, and kidnapped four Palestinians, including two teenagers.

Several military vehicles also invaded different neighborhoods in Hebron city, and installed roadblocks on the main entrances of Sa’ir and Halhoul towns, in addition to the northern entrance of Hebron.

The soldiers stopped and searched dozens of cars, and interrogated many residents while inspecting their ID cards.

In addition, soldiers invaded and searched a home in the Old City of Hebron, and kidnapped a Palestinian teen, identified as Moayyad Edrees, before moving him to an interrogation center.

In Qalqilia, in the northern part of the West Bank, soldiers invaded several homes and kidnapped a Palestinian, identified as Khalil ‘Eid Abu ‘Awwad, after searching his home.

Late on Monday at night, soldiers kidnapped three Palestinians, identified as Amjad Shaher Qamhiyya, and ‘Anan Eyad Halbouni, both from Nablus city, and Firas Mahmoud Hashshash from Balata refugee camp, after stopping them on the Za’tara roadblock.

In related news, a Palestinian man was wounded after Israeli soldiers stopped his car, at the Za’tara roadblock, south of Nablus, and assaulted him while searching his vehicle.

The Palestinian, ‘Amid ‘Othman al-Bahsh, 33 years of age, suffered various cuts and bruises, and was moved to the Rafidia Hospital in Nablus.