Army Fires Shells Into Two Homes, Demolishes A Store And Walls In Jenin 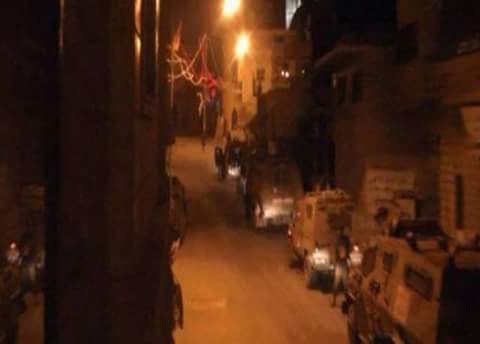 Israeli soldiers continued, on Tuesday at dawn, their invasion into the Jenin refugee camp, in the northern part of the occupied West Bank, and fired missiles into two homes, before demolishing a store and several walls. The invasion into the camp started on Monday evening.During the invasion, the soldiers kidnapped a former political prisoner, his mother, his son and his brother.

The soldiers fired two ‘Energa’ shells targeting two homes in the refugee camp, before demolishing a store and several walls, surrounding the home of former political prisoner Majdi Abu al-Haija, who was taken prisoner after the soldiers also kidnapped his mother, his son Soheib, 18, and his brother ‘Ala.

A Civil Defense medic said the soldiers prevented the medics and ambulances from approaching the targeted homes, especially the home of Abu al-Haija.

He added that the wife of Abu al-Haija suffered fractures in one of her legs, and that the soldiers also invaded and occupied several surrounding homes.

Eyewitnesses said clashes took place between the soldiers and dozens of local youths, who hurled stones and empty bottles on them, and that armed resistance fighters also exchanged fire with the invading forces.

Sounds of loud explosions were also heard in the area, while military helicopters hovered overhead.

The Israeli army said one soldier suffered a moderate-to- severe injury, and was moved to Rambam Israeli Hospital in Haifa.

On Monday evening, soldiers kidnapped a Palestinian, identified as Mershed ‘Obeid Sabarna, 21, after stopping him on a military roadblock at the main entrance of his town, Beit Ummar, north of the southern West Bank city of Hebron.

This article is an update to:
Army Kidnaps Former Political Prisoner, His Mother, Son and His Brother in Jenin