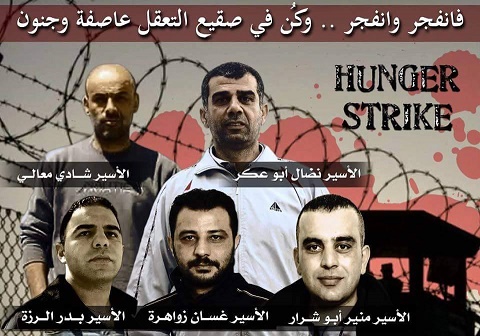 The Palestinian Prisoners Society (PPS) has reported that one of its lawyers managed to visit hunger-striking detainee Bilal Daoud, who informed them he has been denied access to medicine for his chronic brain disease.The PPS said Daoud started his strike on August 24, protesting his continued arbitrary Administrative Detention, without charges or trial.

The detainee stopped his strike for a few days, but resumed it after the Israeli authorities refused to listen to his legitimate demands.

Daoud, 26 years of age, is from the Deheishe refugee camp, in Bethlehem, and has been held under Administrative Detention orders since February 28, 2015; he was repeatedly kidnapped and imprisoned by Israel, and spent five years in detention.

The PPS said that six other administrative detainees are ongoing with their hunger strikes, also demanding their release.

They have been identified as Nidal Abu ‘Aker, Sahdi Ma’ali and Ghassan Zawahra, from Bethlehem, in addition to Bader Rozza from Nablus, and Monir Abu Sharara, from Doura near Hebron; all started their strike on August 20, and Suleiman Tawfiq Eskafi from Hebron, who went on strike on August 1.

Eskafi was recently moved into solitary confinement in the ‘Ofer Israeli prison.