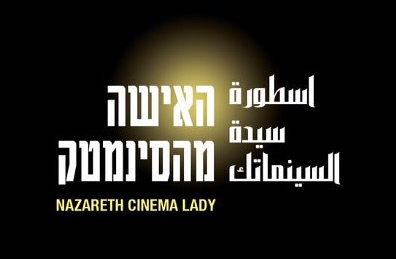 The challenging situation of Palestinian women was created by the establishment of Israel.An article by Nirit Anderman appeared in Ha’aretz about a new film, to be screened next week at the Haifa International Film Festival. The film, Nazareth Cinema Lady, directed by Nurit Jacobs-Yinon, portrays the character of Safaa Dabour, a Palestinian who grew up in a wealthy and religious Muslim family in Nazareth, and who in the 1990’s began to fulfill her dream which held great personal and social meaning – to establish a cinematheque in the city of Nazareth. Despite the opposition and waves of laughter she suffered from her family and various pressures from conservative society, which prefers that woman fulfill their traditional tasks in the home and not do things in public spaces, Safaa Dabour succeeded in realising her dream in 2003. She had the idea after she was forced, like other residents of Nazareth, to go to Tel Aviv’s cinematheque to see a Palestinian-directed film.

It is likely that the author of the article, the film’s director and perhaps even the film’s heroine, do not know this isn’t the first time a woman runs a cinema in Palestine. They certainly don’t imagine that this situation, in which Palestinian women face limitations and difficulties concerning their participation in public leisure space, such as the lack of such spaces in Arab society and the perception of a woman running a cinema as something out of this world, is a direct result of the establishment of the state of Israel. This lack of knowledge is not the result of ignorance, but of intentional actions by the Israeli establishment in what can be defined as “killing memory”. Existing patterns of behaviour in Palestinian society in Israel are not the result of an historical continuation of traditional patriarchy which controls society, but a renewed phenomenon created following the 1948 Middle East war. In this year urban Palestine was annihilated and Palestinian society was thrown backwards, from the 20th century to the previous one. This is because the social situation of women in urban Palestine during the British mandate was much better than the situation under Israeli rule today.

For example: Ophelia Butrus, an exiled Palestinian in Amman, Jordan, was born in Jerusalem’s Talbiyeh neighbourhood in 1927. In 2004 she related to the researcher Manar Hassan that during her teenage years, she used to visit cinemas in the West Jerusalem neighbourhoods of Katamon and Baqa. “We would gather together, the boys and girls from the neighbourhood, and afterwards go in the afternoon or on holidays, although sometimes Dad would go ahead of us to see if there was kissing in the film or not.” “We had a full social life,” Ophelia notes, “we came, went, had mutual visits, parties, everything, until the attacks began.” From the few footprints left behind for us, primarily oral testimonies, we learn that women didn’t only watch the films, but that there were women who ran cinemas and even established them. Anisa Zraik, for example, a teacher from the Galilee village of Ilabun, migranted to Bisan (Beit Sha’an), rented a flat where she lived alone and managed a school. After several years, she resigned and established the first cinema in Bisan (Manar Hassan, doctorate at Tel Aviv University, 2009).

As is known to researchers of Palestinian social history, the Israeli governments took care after eliminating the cities to destroy or move to unknown destinations the archives of the Palestinian cities. Therefore, oral history and Palestinian newspapers from the British mandate period remain an alternative source. From a brief item that first appeared in the Palestine newspaper in August 1929, which announced screening of the film Tremble of Love in Jaffa’s Apollo cinema, we learned that also in the Palestinian port city a woman ran the cinema. The notice: “The Apollo cinema, under direction of Yousef Zamaria’s widow, brought interesting artistic dramas not yet screened in Palestine. Recently the film Tremble of Love was brought, which was successful in Europe. Madame Zamaria brings the best dramas and screens them in the Apollo cinema even before they have been screened in other places. We ask that residents appreciate her efforts and encourage her.”

The social history of Palestinian society, and primarily that residing in urban areas (close to 40 percent prior to the Nakba), was almost entirely erased by intelligence officials and state of Israel experts on Arab affairs, who made up a new narrative according to which all of the progressive elements in Arab society in Israel are the result of Israeli modernisation. To my sorrow there are also Palestinians, flooded by the Israeli hegemonic discourse, who believe this to be true. The connection of Palestinian intellectuals to the true history of their nation signals the end of the Israeli modernisation fairy tale.