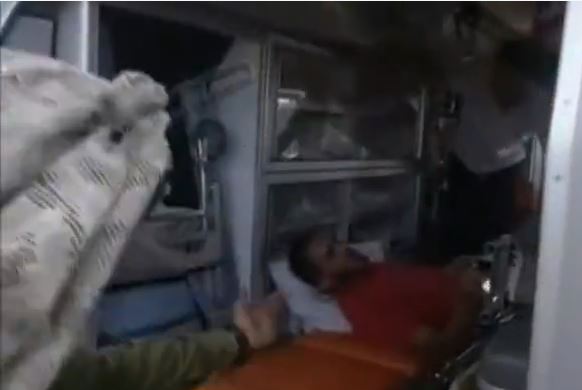 Israeli soldiers attacked, Tuesday, several Palestinian ambulances while transporting wounded Palestinians to hospitals, in Ramallah, kidnapped one Palestinian after dragging him out of the ambulance, and attempted to abduct another.Medical sources said at least two Palestinians were shot with rubber-coated steel bullets, and dozens suffered the effects of tear gas inhalation, after the soldiers assaulted hundreds of Palestinians protesting the ongoing Israeli invasions into the Al-Aqsa Mosque in occupied Jerusalem.

The soldiers stopped Palestinian ambulances, trying to transfer injured residents to hospitals in Ramallah, and kidnapped a wounded Palestinian, identified as Mohammad Ouri, after forcibly removing him from the ambulance.

They also attacked another ambulance, transferring a wounded Palestinian, but were unable to abduct him.

The assaults took place near the Beit El roadblock, north of Ramallah, when the soldiers assaulted dozens of protesters, including various political leaders of different Palestinian factions.

The army fired rounds of live ammunition, rubber-coated steel bullets, concussion grenades and gas bombs, in addition to spraying the protesters with wastewater mixed with chemicals.

In Hebron, in the southern part of the West Bank, soldiers kidnapped a Palestinian child, identified as Bassel Issa Shawaheen, 12 years of age, after breaking into his family’s home and searching it.

Also on Tuesday, at least 18 Palestinians were injured, as Israeli forces suppressed demonstrations across the occupied West Bank in support of the Al-Aqsa Mosque.

Nine Palestinians, including three women, have also been kidnapped in occupied East Jerusalem, after the soldiers attacked several men and women near Al-Aqsa Mosque, and prevented them from entering it.