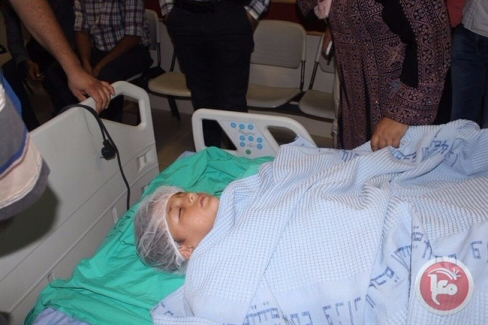 The Palestinian Police is investigating the events that led to the serious injury of a Palestinian child near the northern West Bank city of Qalqilia, after reports surfaced indicating that the family might have fabricated the claim.
The Palestinian Authority said it is now conducting a thorough investigation in reports that indicate the child was injured while playing with a gun owned by a family member.

The Israeli army denied any involved in the incident, and said the family fabricated the claim of the Israeli involvement in an attempt to gain a stipend from the Palestinian Authority.

The wounded child, Yousef Bayan at-Tabib, 6 years of age, from Ezbet at-Tabib village; he suffered a gunshot injury to the stomach.

The Israeli military abducted the brother of the boy, who was allegedly the owner of the gun in question.

Yousef Bayan al-Tabib was standing on the side of the road when the settler reportedly stopped his car, shot the child in the stomach, and fled the scene, a Ma’an reporter said.

The child, from the small Palestinian village of Izbeit at-Tabib — in Area C and around six miles east of Qalqilia — was taken to the Qalqiliya Hospital for treatment.

An Israeli army spokesperson said that the army had received reports of the attack and that Israeli forces had arrived on scene and were ‘investigating any indication that the attack happened.’
The occupied West Bank was rocked by settler attacks on Palestinians and their property on Thursday night and Friday after a fatal shooting attack was carried out by alleged Palestinian gunmen.

The attack left Israeli settlers Eitam and Naama Henkin dead in their car as they were driving in the Nablus area of the northern West Bank.

Hundreds of additional Israeli troops were deployed following the attack, and seven Palestinians were detained in Israeli raids in Nablus at dawn on Saturday.

During the raids a resident was shot by Israeli forces in the chest with live fire and a demolition order was issued for a home in the Askar Refugee Camp to the family of one of the alleged shooters.

While the attack on al-Tabib comes in the wake of Thurday’s shooting and reprisal attacks, Israeli settlers regularly carry out attacks on Palestinians and their property.

An arson attack in July carried out by suspected Jewish extremists burned an 18-month-old Palestinian alive in his home and killed his parents.

At least 324 acts of violence were carried out by Israeli settlers in 2014 according to UN documentation, over half of which resulted in injury.

Such attacks are rarely prosecuted and carried out in the presence of Israeli military forces.