Jerusalem: Dozens of Injuries & Arrests as Israeli Troops Attack, Seal Off Parts of the City 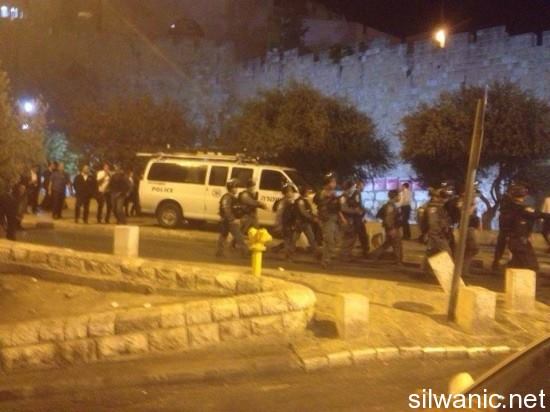 Israeli soldiers, and groups of Israeli extremists, carried out dozens of attacks on Saturday targeting the Palestinians and their property in different parts of occupied Jerusalem, wounding dozens of residents, while the soldiers also kidnapped several Palestinians, and attacked medics. The Wadi Hilweh Information Center in Silwan (Silwanic) said dozens of Israeli extremists invaded the Wadi Hilweh neighborhood, especially near the al-Magharba Gate, and hurled stones and empty bottles on Palestinian homes and property.

The army sealed Wadi Hilweh, before dozens of soldiers, and undercover units of the military, invaded the neighborhood, especially in its alleys, and around of the illegal outposts, and fired several concussion grenades wounding eleven Palestinians, including a child and a woman.

In addition, soldiers kidnapped Amer Da’na, 27, from his home in Ein al-Louza neighborhood in Silwan, and Mahmoud al-A’war from the al-‘A’war neighborhood.

A group of Israeli setters gathered near the Hebron Gate, in preparation to invade neighborhoods in the Old City, but the soldiers stopped them.

One Palestinian suffered various cuts and bruises after being attacked by several extremists in West Jerusalem.

On Saturday evening, soldiers assaulted Palestinian medics of the Red Crescent while trying to provide first aid to wounded residents in Bab al-‘Amoud.

The attacked medics suffered cuts and bruises; they have been identified as Fadi ‘Obeidi, Hamza al-‘Asali and Ahmad Shalloudi.

The soldiers frequently disrupted the work of the medics, tried to damage their ambulances, and attempted to kidnap a wounded Palestinian while receiving treatment in one of the ambulances.

The Red Crescent said one Palestinian was shot with a live round in Bab al-‘Amoud and two were shot with rubber-coated steel bullets.

Another Palestinian was shot with a live round in al-‘Isawiyya town, allegedly after he hurled a Molotov cocktail on a military vehicle. The soldiers also kidnapped Aladdin Baibars, and Moath Sayyad, 13 years of age, in the at-Tour village, in Jerusalem.

The soldiers also invaded the interior of the Al-Qibli Mosque, while heavily armed, and forced around sixty Palestinian to leave the holy site, while eleven young men initially refused to leave. The soldiers later assaulted them as they were leaving through the Chain Gate, and kidnapped two. The army caused excessive damage to the mosque, and occupied its rooftop. 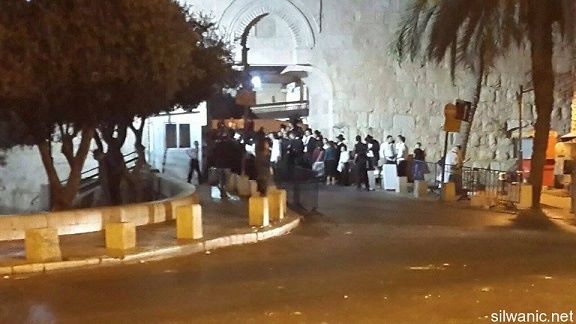