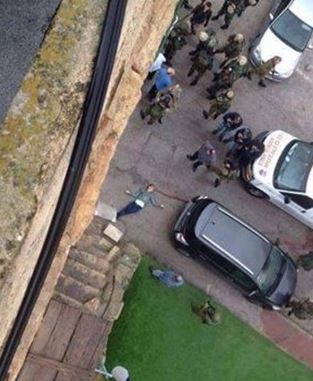 The Palestinian Health Ministry has reported, Thursday, that Israeli soldiers shot and killed a Palestinian teenager, in the southern West Bank city of Hebron, the second Palestinian to be killed in the city in less than three hours.The Ministry said the slain Palestinian has been identified as Farouq Abdul-Qader Seder, 19 years of age.

He was shot dead in the Shuhada Street, close to the Beit Hadassah illegal Israeli colonialist outpost, in the heart of Hebron city.

The Israeli army claimed the Palestinian “carried a knife, and attempted to stab a soldier,” a claim that was strongly denied by eyewitnesses.

The army claims several Palestinian activists, of the Independent Human Rights Committee and Youth Coalition against Settlements, ‘were hiding in the Sharabati home.’

Farid al-Atrash, head of the Independent Committee for Human Rights in the southern part of the West Bank, said the soldiers attacked him and many Palestinians who were with him when they rushed to the scene, where the Palestinian was killed, after hearing gunshots.

‘We are here, and will remain here; we document the Israeli violations; we defend the legitimate rights of the Palestinians to live in peace and dignity,’ he added, ‘The soldiers also fired a gas bomb targeting the Sharabati home, and surrounded it.’

The latest fatal shootings on Thursday bring the number of Palestinians, killed by Israeli army fire in occupied Palestine since the beginning of this month to 68, including 14 children.

49 Palestinians were killed in the West Bank, including Jerusalem, 17 in the Gaza Strip, including a mother and her two years of age child, and one in the Negev, the Palestinian Health Ministry said.

The Ministry added that at least 914 have been shot by live Israeli army fire, while 878 were shot with rubber-coated steel bullets.

It also said that 206 Palestinians suffered fractures and bruises after being beaten by Israeli soldiers and extremist settlers, 14 suffered burns due to Israeli gas bombs and concussion grenades, and more than 5000 Palestinians received treatment for the effects of tear gas inhalation.