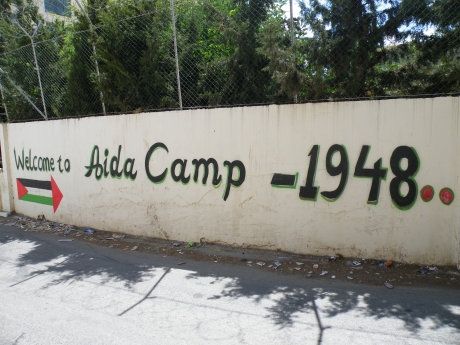 Israeli soldiers invaded, on Thursday at night, the ŌĆśAida refugee camp, in the West Bank city of Bethlehem, and clashed with local youths, before one of the soldiers used the loud speakers of his vehicle to threaten the residents in Arabic, telling them ‘we will gas you all, until you die’.’Residents of al-Azza, we are the occupation armyŌĆ”

If you throw stones on us, we will gas you until you die, the children, the adults, the elders, everything, we will kill everybody…

We will kill you all, if you continue to throw stones on us, and refuse to go home, we will fire gas until you dieŌĆ”

Will fire gas on your parents, sisters and brothers, everybodyŌĆ”

A Palestinian, apparently behind the camera or next to it, could be heard saying ‘his dialect sounds like a Druze soldier with the Israeli army.’

Many Palestinian activists on Facebook and Twitter, said it is interesting that the soldier started his threats with a clear statement ‘We are the occupation army,’ acknowledging he and his army are invaders and illegal occupiers of Palestine, and threatening to kill the children and the elders.

On Thursday evening, soldiers invaded Husan town, west of Bethlehem, and clashed with dozens of local youths who hurled stones and empty bottles on them, causing many residents to suffer the effects of tear gas inhalation.

The clashes took place in the al-Mateena area, overlooking the main road, before extending to the center of the town.