141 Palestinians Injured By Israeli Army Fire In The West Bank 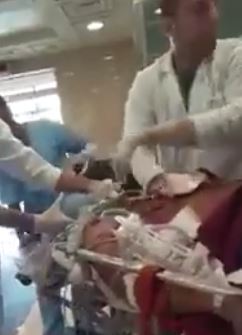 At least 141 Palestinians have been injured, Wednesday, in different parts of the occupied West Bank, as Israeli soldiers invaded several communities, and clashed with hundreds of Palestinians.Medical sources said nine Palestinians were shot with live rounds, 68 with rubber-coated steel bullets, and 53 suffered the effects of tear gas inhalation, while the rest suffered various cuts and bruises.

The Palestinian Red Crescent Society (RCS) said dozens were injured in the southern West Bank district of Hebron, including many who were shot, and others suffered the effects of tear gas inhalation, near the main road leading to Doura town.

Clashes also took place near the Qalandia Terminal, north of occupied Jerusalem, and the army fired rounds of live ammunition, rubber-coated steel bullets and gas bombs, while several youngsters hurled stones and Molotov cocktails on the military tower in the area.

In addition, one Palestinian suffered a serious injury during clashes in the al-Baloa’ area, north of the al-Biereh town, and was instantly moved to surgery in the Palestine Medical Center.

The Health Ministry said five more Palestinians were shot with live fire in the same area, and one was shot in the face with a rubber-coated steel bullet.

In the northern West Bank district of Nablus, the soldiers clashed with dozens of Palestinians near the Beit Forik military roadblock, and closed it amidst the ongoing confrontations.

Medical sources said one child was shot with a rubber-coated steel bullet in the mouth, suffering a moderate injury, before he was rushed to a hospital.

On Wednesday morning, dozens of soldiers invaded the Qalandia refugee camp, north of occupied Jerusalem, and clashed with dozens of local youths, wounding thirteen Palestinians, including a child who suffered a serious injury.

On Wednesday at dawn, the soldiers kidnapped eight Palestinians in the southern West Bank district of Hebron, after the army invaded and searched several homes.