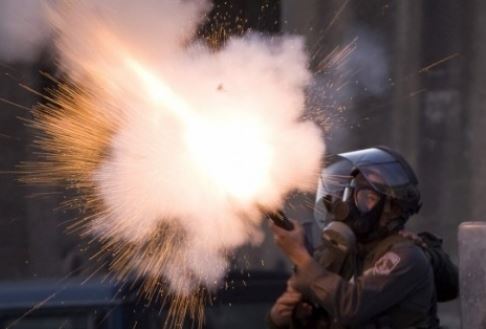 Dozens of Israeli soldiers invaded, on Monday at dawn, the Qalandia refugee camp, north of occupied Jerusalem. The troops killed two Palestinians during clashes with resistance fighters, wounded 34, and demolished one home.
The soldiers exchanged fire with armed resistance fighters during their invasion of the refugee camp, killing two Palestinians, identified as Laith Ashraf Manasra, 25, and Ahmad Abu al-‘Aish, 30 years of age.

The Palestinian Health Ministry said the two slain Palestinians were transferred to the Palestine Medical Center.

Army sharpshooters also occupied the rooftops of several homes in the refugee camp, shot and injured 34 Palestinians with live rounds; some of the wounded suffered moderate to severe wounds.

The soldiers fired several gas bombs at Palestinian medics and ambulances, and obstructed many medics trying to provide the needed aid to wounded Palestinians, detaining the ambulances for extended periods before finally allowing them through.

The army also demolished the second floor of a home belonging to the family of detainee Mohammad Abu Shahin, who is held by Israel for allegedly “participating in killing two Israeli settlers, and wounding three others”, in July of this year.

Eyewitnesses said the soldiers invaded the camp while firing dozens of rounds of live ammunition, and advanced towards the home of Abu Shahin, before wiring the home and detonating explosives inside it.