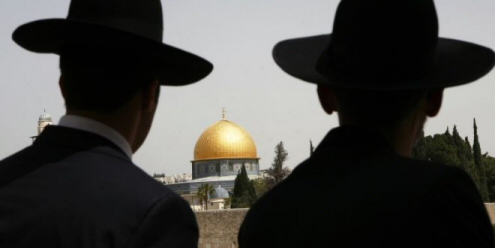 Israeli right-wing paramilitary settlers, on Wednesday, broke into the courtyards of al-Aqsa Mosque compound in Jerusalem, in an act of provocation against Muslims worldwide, who consider it the third-holiest site in Islam. Such invasions, with weapons, into the sacred site are considered a severe violation of its sanctity.Right-wing Jewish hard-liners and rabbis stormed and toured the mosque compound in the morning, provoking tension with Palestinian worshippers who chanted religious slogans in defiance of the invasion of the sacred site.

Meanwhile, Israeli police continue to impose restrictions on Palestinian entry to the site, especially women and youth, holding their identity cards prior to admittance.

The site has continually witnessed invasions of the sacred interior of the mosque by the Israeli military and armed paramilitary settlers – this has increased significantly beginning in August of this year when Israeli soldiers teargassed worshippers in the mosque.

The Jewish extremists invading the site on numerous occasions have stated publicly that they believe the mosque should be destroyed and replaced with a Jewish temple.

Reports that Israel was planning to enforce a temporal division of the mosque between Muslims and Jews also helped fuel the current round of unrest in the occupied Palestinian territories and Israel.

The site is the third holiest place for Muslims, and has, since 1967, been among the core issues in the Palestinian struggle for self-determination. Near the Al-Aqsa Mosque is a site where some Jews believe that two Jewish temples were destroyed in ancient times.

Many Palestinian Muslims worry that if Jewish visitors were allowed to pray in the holy al-Aqsa Mosque, it would eventually lead to a permanent change which will result in full Israeli control and ban on Muslim prayer.

Despite the fact that the site is the location of al-Aqsa Mosque and Dome of the Rock, two of the most holy destinations for Muslims, hundreds of Jewish extremists regularly attempt to legalize prayer at the compound, a move that Israeli police say is a provocation against Muslim worshippers.