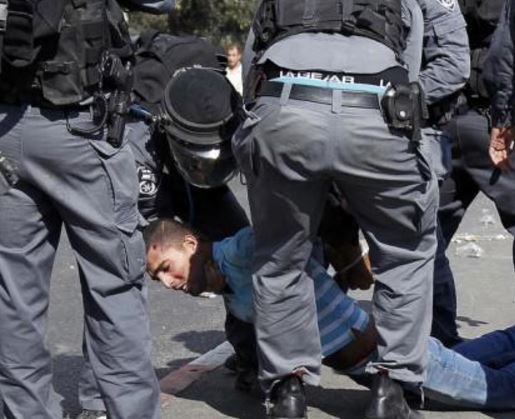 Defense for Children International (DCI), Palestine Branch, has reported that Israeli soldiers have killed 41 children in the West Bank, Jerusalem and the Gaza Strip, since the current uprising began in Palestine, on October 1, 2015. Sixteen of the slain children were killed this year. The IMEMC added the name of the child who was killed, along with her mother, in Gaza.DCI said that, on February 5th of this year, soldiers killed Haitham Sa’da, aged 14, from Halhoul town. in the southern West Bank district of Hebron, while kidnapping his cousin, Wajdi Sa’ada. Also 14, and chased their friend, who was later taken prisoner.

Wajdi told DCI that he and Haitham, along with their friends, were walking near a bypass road used mainly by Israeli soldiers and settlers, before some soldiers hiding in the area opened fire on them. Haitham was killed after suffering gunshot wounds in his upper body, while Wajdi was taken prisoner.

“We never hurled stones on them, never attacked them, but a soldier jumped and punched me in my face. I fell down, and they ordered me to remove my shirt,” he said. “I was looking at Haitham; he was motionless, looked dead, and then the soldiers cuffed him, and left the area.”

DCI said Haitham was shot with a live round which entered his back, severing his spine and puncturing his lung, and exited through his mouth, and that the soldiers then cuffed and blindfolded Wajdi and took him to a nearby military outpost in Karmie Tzur colony, where he was forced to stand in the cold for more than 90 minutes.

The soldiers held the child until midnight and, then, started interrogating him, without any legal representation or even the presence of a family member.

“They had an interpreter; the interrogator asked me about what I was doing in that area,” Wajdi told DCI. “He then held me by my head and pushed it against a wall before he slapped me, pushed me, and left the room.”

“30 minutes later, he started threatening me, told me he would keep hitting me, place me in a cell for a very long time, and that I would be sentenced to a high term if I did not confess.” He added, “I never said a word, he made me watch a video recording on his computer, and the three of us were there on tape, but nothing in it implicated us of anything, including throwing stones.”

DCI said the interrogator tried to force Wajdi to say that he carried a Molotov cocktail, but he rejected their claims and demands. The interrogator then started shouting and banging his hand on the table, in an attempt to scare the child into making a false confession.

“I told them I did not carry anything; my hands were empty,” the child said. “Then, the interrogators forced me to sign some papers in Hebrew; I signed, but I never knew what they said.”

The next day, Wajdi was cuffed, chained and blindfolded; the soldiers forced him to walk in front of them while shouting and cursing at him, and then transferred him to the Ofer prison. He is now awaiting trial.

“Under International Law, the excessive use of force is only used against imminent danger, deadly situations, a serious injury or to prevent a serious crime that would likely lead to death or serious harm,” DCI stated. “The UN requires exerting all efforts to avoid the usage of firearms, especially against children.”

Another case DCI has been working on is that of Mahmoud Sha’lan, aged 16, from Deir Dibwan town, north of Ramallah, after soldiers killed him on February 26, near Beit EI settlement.

An eyewitness told DCI that he was waiting for the soldiers to allow him, and at least five other drivers in their cars, to pass through the Beit El roadblock. He said Sha’lan then started walking towards the roadblock, carrying nothing in his hands.

“We heard three gunshots when Sha’lan went behind a concrete room with one of the soldiers,” he said. “We then decided to turn around and leave, but that is when I saw the child laying on the ground, wounded. Then, a soldier fired two more rounds on him.”

Medical sources at the Palestine Medical Center told DCI that Sha’lan was shot with five live rounds; three in his chest and two in his arm.

DCI reiterated that the occupying force, under International Humanitarian Law, must provide protection to the people it occupies, must protect the children, and is obliged to conduct serious investigations into all crimes committed against those civilians.

“But, this rarely happened; since October 1, Israel never investigated any of the fatal shooting incidents against children,” DCI added. Israeli authorities even rejected demands from the victims’ families to perform autopsies.
Israel is still holding the corpses of two children identified as Masan Manasra and Mo’taz Oweisat.

DCI said that the children killed by Israelis since October 1, 2015, until this day, have been identified as;

4. Ahmad Sharaka, from the al-Jalazonerefugee camp in Ramallah, killed on October 11, 2015.

It is worth mentioning that the Israeli army also killed Rahaf Yahya Hassan, 2, and her mother, Nour Rasmie Hassan, 30, who was five months pregnant, after bombarding their home in the Zeitoun neighborhood, in Gaza city, on October 11, 2015.