A Year In Review: Will 2020 Be A Game Changer In Palestine? 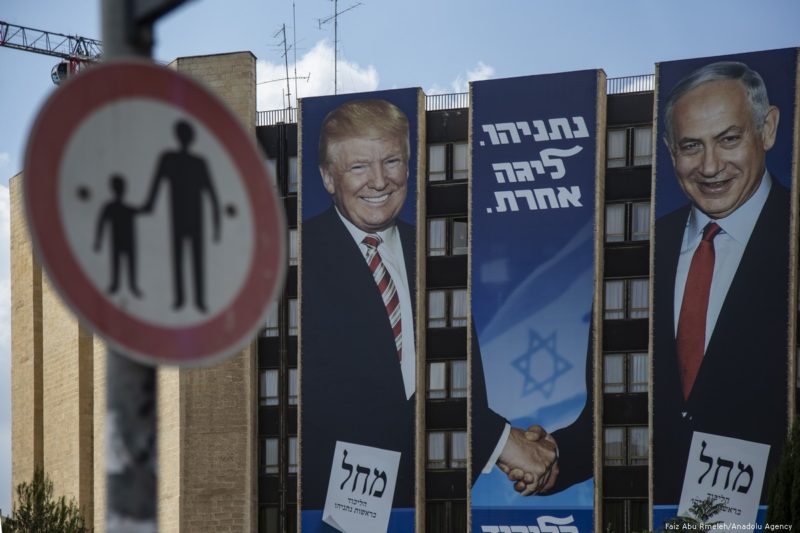 This has been a defining year for Palestine and Israel. Despite the usual political stagnation of the Palestinian leadership, two factors contributed to making 2019 particularly eventful and, looking ahead, consequential as well: The unprecedented political power struggle in Israel, and the total US retreat from its own self-proclaimed role as an “honest peace broker”.

Since his first day in office, US President Donald Trump has made no secret of his desire to embrace fully the right-wing agenda of Israeli Prime Minister Benjamin Netanyahu. Although the process started earlier, 2019 has witnessed the complete collapse of traditional US foreign policy which was, for nearly three decades, predicated on the principle of a negotiated political solution.

This year delivered the final American assault on Palestinian rights. At the stroke of midnight on New Year’s Eve 2019, the US officially quit the UN Educational, Scientific and Cultural Organisation (UNESCO), accusing the global institution of “anti-Israeli bias”. The US government has contributed over 22 per cent to UNESCO’s budget. Among other things, the American action was meant as a warning to the Palestinian leadership and its allies that Washington was ready and willing to use its financial and political muscle to suppress any criticism of Israel.

Washington’s threats, however, failed to deliver the desired outcomes. On 8 February, Trump’s top adviser and son-in-law, Jared Kushner, arrived in the Middle East to promote his so-called “deal of the century”, a strategy that revolved around the creation of an alternative political paradigm to replace the defunct “peace process”.

US punitive measures continued. On 4 March, the US shut down its Consulate in Jerusalem, now that it had a fully operational embassy in the city. The act was intended to downgrade the US mission in Palestine, and thus the diplomatic relationship with the Palestinian Authority. A few days later, on 14 March, the US dropped the term “occupied territories” when referring to the Occupied Palestinian Territories in its annual human rights report. This measure was understood, and rightly so, as a prelude to a future US recognition of Israel’s sovereignty over occupied Palestinian land. On 18 November, the US Secretary of State, Mike Pompeo, duly declared that illegal Jewish settlements in the West Bank and Jerusalem are “consistent” with international law.

Although Washington seemed determined to send a clear message to both Tel Aviv and Ramallah that past policies have been reversed for good, it was still unable to articulate clearly an alternative political agenda. The once-hyped “deal of the century” discourse slowly faded from the Middle East political scene. Initially, the sidelining of the “deal” took place in anticipation of the outcomes of two general elections in Israel, which were held in April and September. However, over time, it was becoming clearer that Trump’s “deal” had no chance of success.

One sign of trouble in the US “peace-making” efforts was the resignation of the top US Middle East envoy, Jason Greenblatt, on 5 September. Greenblatt, who was one of the three main advocates of Washington’s new Middle East policy — the others being Kushner and US Ambassador to Israel David Friedman — did much damage before his abrupt exit. Shortly before his return to Washington, he declared that illegal Jewish settlements are merely “neighbourhoods and cities” and that “people [should] stop pretending” that they “are the reason for the lack of peace.”

US pressure on Palestinians extended beyond the Occupied Territories, to include a crackdown on the boycott, divestment and sanctions movement (BDS). On 23 July, the movement was condemned by the House of Representatives, in Resolution 1850, despite some stiff resistance. Israel fears that BDS has tarnished its image internationally, especially as the movement took the struggle of Palestinians to numerous international platforms.

Unhindered by even a minimal degree of accountability, the Israeli government has even more of a free rein to expand illegal settlements, especially in the Jerusalem area, and to accelerate land confiscation throughout the West Bank.

In January, Israel closed all schools operated by the UN agency responsible for the welfare of Palestinian refugees, UNRWA, in Jerusalem, further undermining any Palestinian claim over their city. A week later, the Israeli army expelled the international observation force from the occupied Palestinian city of Al-Khalil (Hebron). In March, Netanyahu was joined by Pompeo in a provocative visit to the Western Wall in Jerusalem, conveying another message to Palestinians that, in the words of Trump, “Jerusalem is off the table”. This act was repeated on 1 April, when Netanyahu was joined by newly-elected right-wing Brazilian President Jair Bolsonaro. The latter pledged to follow the American lead by relocating its embassy to Jerusalem.

In the meantime, the scope and frequency of Israeli violence against Palestinians increased dramatically in the occupied West Bank and the besieged Gaza Strip. Israeli army violence in the West Bank was manifested in the raiding of Palestinian villages, the frequent crackdown on protests and the arrest and killing of activists. Concurrently, armed Israeli Jewish settlers attacked Palestinian farmers and students, and raided holy sites. Al-Aqsa Mosque, in particular, was a hotspot of clashes between armed Jewish settlers and the Israeli army on the one hand, and unarmed Palestinian worshippers on the other. The shooting in cold blood at the Qalandiya checkpoint of Nayfeh Kaabneh on 18 September, a murder that was caught on video, symbolised the wanton nature of Israeli brutality.

In Gaza, the siege and violence continued. The Great March of Return protests, a collective form of popular resistance, which began on 30 March 2018, carried on unabated. Every Friday, thousands of Palestinians gathered at the fence separating the besieged Strip from Israel, demanding an end to 13 years of isolation and economic blockade. In 2019, the death toll among protesters crossed the 300 mark. Thousands more have been wounded. The bombing of Gaza by the Israeli military, which took place on many occasions, was often justified by Israel as a “response” to rockets fired by Palestinian militants. The two most notable conflagrations took place on 5 May and 12 November. In the first assault, Israel killed at least 24 Palestinians, while four Israelis were also reportedly killed. The second attack resulted in the killing of 34 Palestinians, including eight from the same Abu Malhous family. No Israelis were killed.

There was a clear link between Israeli violence in Gaza and the general elections, where embattled Netanyahu tried to convince his right-wing constituency of his ability to crack down on Palestinians and to protect Israeli towns in the southern part of the country.

Netanyahu’s often racist rhetoric and violent policies, however, failed to garner him the necessary votes to form a government, neither in April nor in the subsequent vote in September. On both occasions, the Israeli Prime Minister attempted to cobble together a right-wing coalition that would give him a majority in the Knesset (Parliament). His first attempt was crushed by the ultra-nationalist leader and head of Yisrael Beiteinu party, Avigdor Lieberman. The latter vote weakened Netanyahu’s political standing, as his centrist opponent and head of the Kahol Lavan (Blue and White) Party, retired General Benny Gantz, gained the upper hand.

While the US and Israel seemed clear about their objectives, the Palestinian leadership sank further in its political stagnation. All talks of unity among Palestinian groups Fatah, Hamas and others faltered, especially as PA Prime Minister Rami Hamdallah, who championed the cause of dialogue, resigned from his position on 29 January. Hamdallah was replaced by Mohammad Shtayyeh, a loyalist of the Palestinian leader, Mahmoud Abbas.

Shtayyeh’s appointment, along with several other steps taken by Abbas to consolidate his grip on power, made it clear to the Palestinian people that the issue of unity is no longer a priority for the aging President. On 25 September, Abbas called for elections to be held in the West Bank, Gaza and Jerusalem, inviting all Palestinian factions, including Hamas, to participate. Hamas agreed swiftly to take part, but not without questioning Abbas’ motives.

There were occasions, however, when Palestinians, regardless of their ideology or politics, seemed united, especially whenever Israel cracked down on Palestinian prisoners. On 21 January, the Israeli police brutally attacked Palestinian prisoners in the Ofer Prison and elsewhere. Many Palestinians were wounded in the raids. In response, thousands of Palestinians in the West Bank and Gaza rose up in protest, and in solidarity with the nearly 5,000 prisoners held by Israel.

Throughout the year, several Palestinian prisoners died while in detention, mostly due to medical negligence. They included Faris Baroud, who died on 6 February, after spending 27 years in Israeli prisons, and Bassam Al-Sayyeh, who died on 8 September. Elected Palestinian MP Khalida Jarrar was released from her administrative detention — imprisonment without trial — on 28 February, only to be re-arrested on 31 October.

Another example of unity among Palestinians was the collective outrage felt following the murder of Israa Ghrayeb, a young woman who was allegedly killed by members of her own family. The mass protests forced the PA to amend laws that granted leniency in cases of so-called “honour killing”.

In some ways, 2019 did indeed prove to be a game-changer in Palestine and Israel. It is the year when the Israeli government managed to achieve total and unconditional US support, while the Palestinian leadership was left largely isolated and incapable of formulating an alternative agenda. However, while Israel persists in its prolonged political crisis and as the international community is still unable or, perhaps, unwilling, to play a more fundamental role in ending the Israeli occupation of Palestine, 2020 promises to be equally tumultuous and challenging.

A particularly interesting development to watch for in the coming year is that which will follow the International Criminal Court (ICC) decision announced on 20 December to launch “an investigation into the situation in Palestine”. Expectedly, the US rejected the ICC decision and the Israeli government threatened that it would bar ICC investigators from entering the country.

If the 2019 trends continue, the struggle among Israel’s political elites is likely to deepen the country’s instability. However, it could also pave the way for the long-marginalised Arab minority within Israel, and their representatives, to play a more substantial role in, at least, shifting the political discourse in the country from one which is racially-centred to a more inclusive and, indeed, more democratic system. While this may appear to be wishful thinking, given the deeply rooted racism in Israel, one can only hope that the destructive nature of its right-wing politics could also bring about the need for a major rethink. Time will tell.