Adalah: Israeli AG Fails to Respond to Appeals against Closure of Bakr Investigation

Paramedics and media crews at the location minutes after the attack on the beach that killed the four Bakr children as they were playing on the beach. (Courtesy of Al Mezan)

The Legal Center for Arab Minority Rights in Israel, Al Mezan Center for Human Rights (Gaza), and the Palestinian Center for Human Rights (Gaza) sent a letter on 20 August 2017 to senior Israeli legal officials demanding that they respond to the appeals submitted against the closure of the investigation into the 2014 killing of four children on a Gaza beach and order the military to hand over materials from its investigation.

On 16 July 2014, during the military offensive that Israel termed “Operation Protective Edge”, the Israeli forces fired missiles that killed four children  of the Bakr family – Ahed (10 years), Zakaria (10 years), Mohammed (11 years) and Ismail (10 years) – while they were playing soccer on Gaza City’s fishermen’s beach. Six other civilians were also wounded in the missile attack, including four children from the Bakr family.

This incident was witnessed by foreign journalists covering the 2014 Gaza war and it received widespread global media coverage.

Paramedics evacuating one of the Bakr children after the attack. (Courtesy of Al Mezan)

Two days later, Adalah and Al Mezan sent a letter to the Israeli defense minister, the military advocate general, and the attorney general, demanding an investigation into the killing of the Bakr boys. Almost one year later, on 11 June 2015, the Israeli army announced the closure of the investigation without further measures. Two months after that, in August 2015, the organizations filed an appeal on behalf of the victims’ families demanding access to investigatory materials and a reopening of the probe.  The Israeli authorities have failed since then to respond to the request.

The Palestinian Center for Human Rights (PCHR) in Gaza also submitted a complaint and later an appeal to the AG against the MAG’s decision to close the case in August 2015. Despite providing the military with additional materials, sending several reminders and requesting access to the investigatory materials, PCHR was also unable to get any response from the MAG or the State Attorney regarding this case.

In their 20 August 2017 letter to Osnat Mendel, director of the Supreme Court Department in the Israeli State Attorney’s Office, the three human rights organizations also demanded Israeli Attorney General Avichai Mandelblit issue a decision on the appeals against the closure of the Bakr boys investigation. 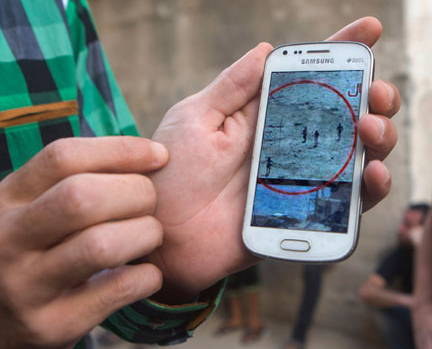 A member of the Bakr family showing a screen shot on his mobile phone showing the Bakr children running on the beach after the first missile was launched. (Courtesy of Al Mezan)

Attorneys Muna Haddad and Tamim Younis wrote in their letter that this case exemplifies Israel’s flawed investigation system and unwillingness to genuinely carry out an investigation:

“This is an unreasonable delay highlighting a lack of willingness on the part of [Israeli] authorities to conduct an effective investigation. They are essentially thwarting any possibility of conducting such an investigation. The obligation to investigate any suspicion of war crimes is anchored in international law. An investigation must comply with the universal principles of independence, effectiveness, promptness, impartiality and transparency… The nature of this investigation and the unreasonable foot-dragging when it came to responding to parents’ appeals are a gross violation of these international standards.”

The human rights organizations also stressed that the ineffective nature of the Israeli investigative system grants de facto immunity to military figures involved in the incident:

These unjustifiable delays and investigative “failures threaten to thwart any chance of bringing to justice those responsible for the killing of civilians and the violation of international humanitarian law.”

Three days after the attack, members of the Bakr family sit in a room without electricity in their home in Al Shati’ (Beach) refugee camp, fearing further attacks. (Courtesy of Al Mezan)

CLICK HERE to read a joint report by Adalah and Al Mezan: Gaza 3 Years On – Impunity Over Accountability