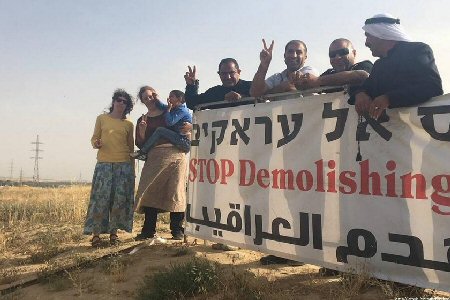 According to local residents, in the morning, occupation authorities bulldozed and destroyed homes and tents under the protection of occupation police forces. Eyewitnesses also confirmed that police arrested Sheikh Sayyah Al-Turi, who had only been released from Ramla prison on Tuesday morning after being detained for seven months.

Al-Turi’s sentence was extended for 60 days after prison services conditioned his release on his forcible transfer and deportation from Al-Araqib to the city of Rahat. Israeli authorities demolished Al-Araqib for the 147th time the day before Al-Turi’s release.

The Bedouin village is one of 51 “unrecognized” Arab villages in the Negev and is constantly targeted for demolition ahead of plans to Judaize the Negev by building homes for new Jewish communities. Israeli bulldozers, which Bedouins are charged for, have demolished everything, from the trees to the water tanks, but Bedouin residents have tried to rebuild it every time.

Bedouins in the Negev must abide by the same laws as Jewish Israeli citizens. They pay taxes but do not enjoy the same rights and services as Jews, in Israel, and the state has repeatedly refused to connect the towns to  the national grid, water supplies and other vital amenities.

Israeli authorities claim that the Bedouins are on the land illegally, as it is “state property”. However, the Bedouins’ ownership was registered as long ago as when they lived in the area under Ottoman rule. The State of Israel, established in 1948, does not recognize their title deeds.

In 1969, Israel called on Palestinian land owners to register their land with the authorities, but since then they have not accepted any of the applications made by Palestinian residents of the Negev.