Army Abducts A Palestinian In Hebron, Summons Two For Interrogation 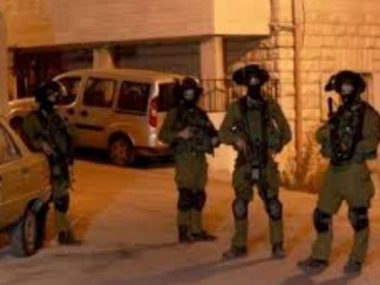 The Hebron office of the Palestinian Prisoners Society (PPS) said the soldiers abducted Monjed Khaled ‘Ashour, from his home in the city, and took him to an unknown destination.

The soldiers also invaded the home of detainee Tareq Ed’eis, who has been imprisoned by Israel for the past ten years, and violently searched the property, before confiscating his father’s car.

In Beit Ummar town, north of Hebron, the soldiers invaded the al-Bayyada area, before storming the home of Yousef Bader Khalil, 37, and summoned him, along with his brother Mahmoud, 32, for interrogation in Etzion military base.

The two siblings, both former political prisoners, who were repeatedly detained and imprisoned by Israel, were ordered to head to Etzion for interrogation, Tuesday.

Furthermore, the soldiers installed roadblocks at the main entrance of the al-Fawwar refugee camp, north of Hebron, and closed its iron gate, preventing cars from entering of leaving it, and ordering the Palestinians to cross of foot.

The soldiers also invaded Hebron city, and the nearby towns of Surif, Sa’ir and Halhoul, and installed roadblocks, before stopping and interrogating many Palestinians, while inspecting their ID cards.