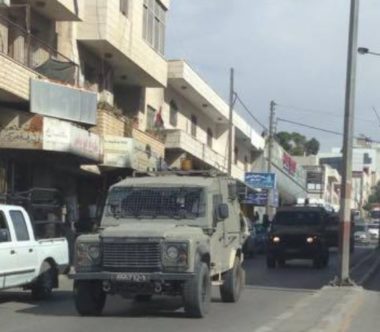 Media sources said the soldiers abducted Luay Mohammad Natour, 17, after detaining and interrogating his father for several hours at a military base near Jenin.

The father remained under interrogation and was only released a few hours after the soldiers abducted his son.

In related news, dozens of soldiers invaded the area of the Arab American University in Jenin, in addition to the towns of Qabatia and Zababda, before installing many roadblocks.

The soldiers stopped and searched dozens of cars and interrogated the Palestinians while inspecting their ID cards.

In related news, the soldiers invaded the central West Bank city of Salfit, and fired dozens of live rounds, rubber-coated steel bullets and gas bombs at Palestinians protesting the invasion, killing a young man, identified as Mohammad Jamil Shahin, 23, and wounding more than 40 others.

In addition, the Palestinian Health Ministry in the Gaza Strip has confirmed, Tuesday, that a young man, identified as Mousa Mohammad Mousa, 23, who was shot and seriously injured by Israeli army fire, on March 1st, during the Great Return March processions, has died from his wounds.