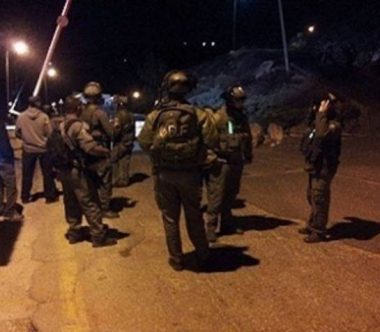 Israeli soldiers invaded, on Sunday at dawn, several areas in the occupied West Bank, broke into and searched many homes, and abducted at least eight Palestinians.

Mohammad Awad, the media spokesperson of the Popular Committee in Beit Ummar town, north of the southern West Bank city of Hebron, said the soldiers invaded and ransacked many homes, interrogated several Palestinians, before abducting two, and summoned another Palestinian for interrogation.

Awad also said that the soldiers summoned Ibrahim Mahmoud Sabarna, 47, for interrogation in Etzion military base and security center, north of Hebron.

In Bethlehem, the soldiers abducted Mahmoud Essam Jaber, 25, after hurling many gas bombs and concussion grenades at him home.

In the Saff Street in Bethlehem, the soldiers invaded the family home of Nidal Saqqouq, who was killed by Israeli army fire in 2009, and searched the property.

Also in Bethlehem, the soldiers abducted Abdul-Fattah Harb al-Miskawi, after invading his home and searching it.

Another Palestinian, identified as Hasan Ibrahim Sayyed, 20, was kidnapped in the central West Bank city of Ramallah, after the soldiers illegally confiscated his motorcycle.

In occupied Jerusalem, the soldiers invaded homes and abducted a woman, identified as Hanadi al-Halawany, in addition to abducting Mohammad al-Hindi and Ahmad Ali, from their homes in Shu’fat, north of the city.