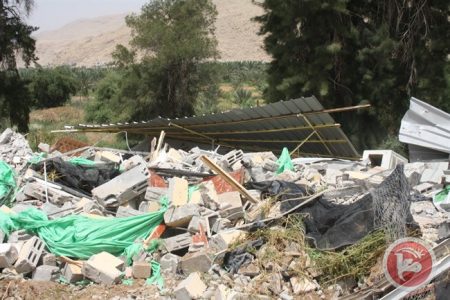 Israeli authorities demolished four structures in the village of al-Jiftlik, in the occupied West Bank district of Jericho, on Tuesday morning.

Residents of the village, which is located in the Jordan Valley region, said that Israeli bulldozers under military protection demolished two makeshift homes and two barns belonging to Najih Kaabnah and his son Odeh, due to them being built without hard-to-obtain Israeli permits.

A spokesperson for the Coordinator of Government Activities in the Territories (COGAT), the Israeli agency responsible for implementing Israeli policies in Palestinian territory, only confirmed two demolitions to Ma’an News Agency, saying that the structures were “built without receiving permits from the qualified authorities.”

Israeli forces demolished at least nine structures in the al-Jiftlik area in January, because they were allegedly located in a “firing zone,” a COGAT spokesperson said at the time.

Rights groups have said that Israeli military training zones, known as a “firing zones,” are used as a pretext to fully annex portions of the occupied West Bank.

Nearly 20 percent of the occupied West Bank has been declared “firing zones” since the 1970s, but according to the UN, nearly 80 percent of these areas are not in fact used for military training. However, when military training does take place, Israel forces families to leave their homes for hours or days at a time until the drill is over.

Meanwhile, seven illegal Israeli settlements and settlement outposts are built on al-Jiftlik lands, according to the Applied Research Institute – Jerusalem.

Forming a third of the occupied West Bank, with 88 percent of its land classified as Area C — under full Israeli military control — the Jordan Valley has long been a strategic area of land unlikely to return to Palestinians following Israel’s occupation in 1967.

Demolitions of Palestinian infrastructure and residences occur frequently in Area C, with Bedouin and herding communities being particularly vulnerable to such policies.

Israel almost never gives Palestinians permission to build in land classified as Area C — the more than 60 percent of the West Bank under full Israeli control — leaving residents no choice but to build their homes without permits who “live in constant fear of their homes and livelihoods being destroyed,” Israeli rights group B’Tselem has said.