Army Destroys Inner Walls Of A Home Near Hebron, Abducts One Palestinian 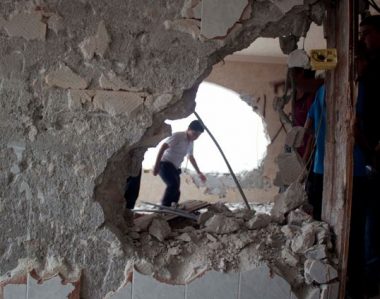 On Wednesday afternoon, Israeli soldiers invaded a Palestinian home in Kreisa village, west of Doura, south of the southern West Bank city of Hebron, and demolished the inner walls of a home of a former political prisoner, and abducted one Palestinian in Bani Neim town, east of Hebron.

The WAFA Palestinian News Agency said the soldiers surrounded, for several hours, the home of former political prisoner, Rezeq Rajoub, who spent fifteen years in Israeli prisons, and detained the entire family after confiscating their homes.

WAFA added that the soldiers brought heavy equipment, and started digging around the home before invading it, and demolished its inner walls.

The soldiers also prevented Red Crescent medics from reaching the nearby home of Rajoub’s son, as they were trying to transfer the son’s pregnant wife to a hospital.

In Bani Neim town, east of Hebron, the soldiers abducted Soheib Abdul-Hamid Abu Jarour, after searching and ransacking his home.

In Tulkarem, Palestinian medical sources have reported that many residents suffered the severe effects of teargas inhalation after the soldiers invaded Anabta town, east of the city, and fired gas bombs at dozens of residents marching in solidarity with the hunger striking Palestinian detainees.

Furthermore, the Palestinian Prisoners’ Society (PPS) has reported that Israeli soldiers abducted, earlier Wednesday, three Palestinians in Qalqilia and Jenin, in the northern part of the occupied West Bank.