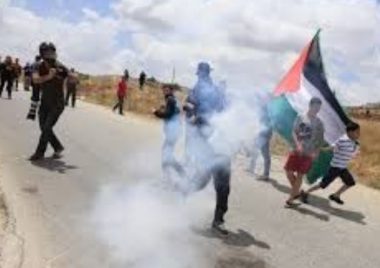 Palestinian medical sources have reported, Wednesday, that many residents suffered the severe effects of teargas inhalation after the soldiers invaded Anabta town, east of the northern West Bank city of Tulkarem, and fired gas bombs at dozens of residents marching in solidarity with the hunger striking Palestinian detainees.

Media sources in Tulkarem said many armored Israeli army jeeps invaded Anabta, especially from the area near the Annexation Wall gate, and started firing gas bombs at nonviolent protesters, marching in solidarity with the Palestinian detainees, ongoing with their hunger strike, which started on April 17.

The attack led to clashes between the soldiers and local youths. who burnt tires and closed roads, in an attempt to prevent the military from advancing.

The soldiers fired dozens of gas bombs, causing many Palestinians to suffer the effects of teargas inhalation.

The Palestinians were nonviolently marching while carrying posters of many detainees, Palestinian flags, and chanting in solidarity with the detainees, for freedom and independence.

Furthermore, the Palestinian Prisoners’ Society (PPS) has reported that Israeli soldiers abducted, earlier Wednesday, three Palestinians in Qalqilia and Jenin, in the northern part of the occupied West Bank.