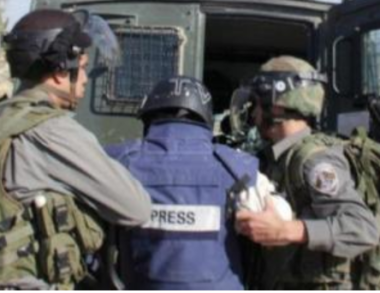 Israeli soldiers detained, Sunday, seven Palestinian journalists and one human rights worker, in the northern Plains of the occupied West Bank, as they were documenting the army while displacing families to conduct military training.

They added that the soldiers also detained Fares Foqaha, who works for the Al-Haq independent Palestinian non-governmental human rights organization.

The soldiers moved the abducted Palestinians to their military base, east of Tayasir Palestinian village, northeast of Tubas.

The abducted Palestinians were documenting the army’s attack against Bedouin families in Hamsa al-Foqa village, as the soldiers were preparing to conduct live fire military drills.

The Palestinian Journalists Syndicate strongly denounced the Israeli violation, and said the soldiers also confiscated the equipment carried by the detained journalists.

It called on various international organizations, and the United Nations, to intervene and stop the ongoing Israeli violations against the journalists and media outlets in occupied Palestine.