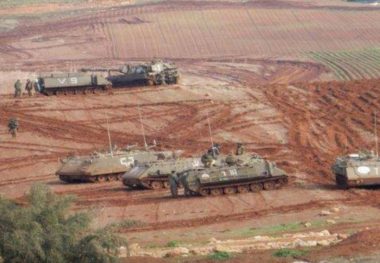 Israeli soldiers displaced, on Wednesday morning, dozens of Bedouin Palestinian families from their tents and dwellings in several parts of the West Bank’s Northern Plains, in order to conduct military training.

Media sources said the soldiers removed the families from the areas of ar-Ras al-Ahmar, Al-Mayta, al-Borj and Hammamat al-Maleh.

The families were seen leaving their dwellings on agricultural tractors and trucks, while military vehicles, including tanks, rolled into the area.

Last week, the families received ordered informing them that they must leave their dwellings, Wednesday, from ten in the morning until five in the evening.

The Israeli military drills are frequently carried out in the occupied West Bank, and the near Bedouin communities in the Negev, resulting in displacing the families in addition to dozens of casualties, including fatalities, due to explosives dropped by the army during training.