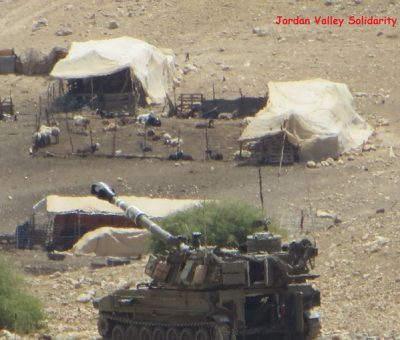 On Monday, Israeli soldiers started the illegal eviction and removal of 42 Palestinian families, out of their homes and villages, in the Jordan Valley of the occupied West Bank, in order to conduct live fire training in their communities.

The families have no alternatives for shelter, and will be left under extremely high temperatures, as high as 40° (104 Fahrenheit).

The Israeli military frequently conducts life fire training, including explosives, in the Jordan Valley, after ordering the Palestinians out of their dwellings, an issue that repeatedly led to casualties, including death, when explosives dropped by the army during training, exploded near the residents. Such types of military activities in civilian areas violate International Law and the Fourth Geneva Convention, especially articles related to the protection of the population.

While repeatedly displacing the Palestinians in the Jordan Valley, continuously putting them in serious risk, and even causing deaths and injuries, Israel continues to develop and construct illegal colonies, companies and factories, in large areas of illegally-confiscated Palestinian lands.

The Jordan Valley Solidarity called on the European Union and rest of the international community, to stop Israel’s violations of the basic Palestinian rights, to provide the needed protection for the civilians in occupied Palestine.