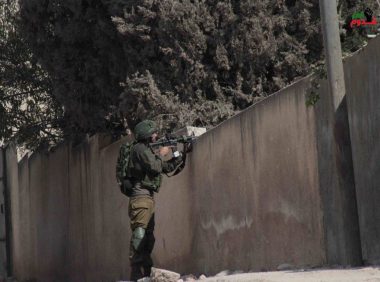 Israeli soldiers invaded, Friday, the town of Kufur Qaddoum, east of the northern West Bank city of Qalqilia, and attacked the weekly procession against the Annexation Wall and Colonies, wounding one child.

The Popular Committee against the Wall said the soldiers used excessive force against the protesters, leading to clashes.

Medical sources said one child, 14 years of age, was shot in the abdomen, and was moved to a hospital in Qalqilia.