Army Injures A Teacher, Abducts Principal, And Causes Many Students To Suffer Effects Of Teargas Inhalation, In Hebron 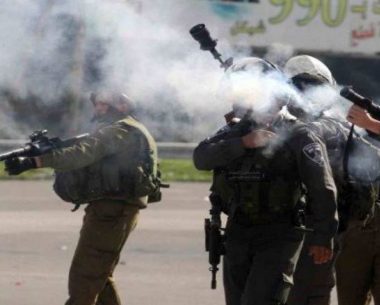 Israeli soldiers invaded, on Monday morning, the southern West Bank city of Hebron, and attempted to invade a school, before assaulting and wounding a teacher, and caused many Palestinians to suffer the effects of teargas inhalation, in addition to abducting the school principal.

Media sources in Hebron said the soldiers attacked teachers trying to get the students into the campus of a local elementary school, wounding one teacher, identified as Shokri Zaro.

They added that the soldiers also fired many gas bombs and concussion grenades directly into the school, and the surrounding areas.

Many schoolchildren suffered the effects of teargas inhalation, and several others suffered anxiety attacks.

In addition, the soldiers abducted the school principal, identified as Adnan Da’na.

The school provides education to approximately 370 children, and is subject to repeated Israeli military violations.

The Israeli army is constantly deployed near and around many schools, in Hebron as well as several parts of the occupied West Bank, an issue that causes ongoing tensions, scores of injuries and abductions.