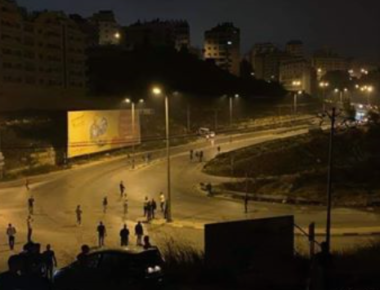 Several Israeli army vehicles invaded, on Thursday at dawn, the at-Tira neighborhood in the central West Bank city of Ramallah, and shot a cameraman working for Palestine TV, in addition to abducting four Palestinians in the neighborhood, and nearby villages.

The Palestinian TV has reported that the soldiers invaded the at-Tira neighborhood in Ramallah, and attacked Palestinians, who protested the invasion and hurled stones at the army jeeps.

The soldiers also invaded and ransacked many homes in the neighborhood, and abducted a former political prisoner, identified as Mohammad Walid Hanatsha.

Eyewitnesses said that protests erupted after the soldiers invaded Kobar, and ransacked the home of a political prisoner, identified as Anas Barghouti. The soldiers fired gas bombs and concussion grenades at Palestinian youngsters protesting the invasion.

In Jifna village, north of Ramallah, the soldiers stormed the house of Tareq Matar, just hours after abducting him at Za’atra military roadblock, south of the northern West Bank city of Nablus.