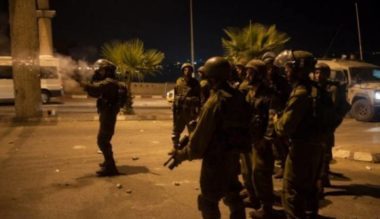 Israeli soldiers abducted, on Thursday at dawn, five Palestinians from their homes in the West Bank governorates of Hebron, Bethlehem, Qalqilia and Jenin, after the army invaded and searched many homes.

The soldiers invaded and searched many homes in the southern West Bank governorate of Hebron, interrogated many Palestinians while inspecting their ID cards, and abducted a former political identified as Yousef Abu Hussein, in addition to Bashir Khaled Rajabi.

In Bethlehem, south of occupied Jerusalem, the soldiers abducted Mohammad Qawwar, from his home in Wadi Ma’ali neighborhood, in the center of the city, and Ahmad Ismael Hamamda, 19, from Deheishe refugee camp, south of Bethlehem.

In Jenin, in northern West Bank, the soldiers searched homes in Anza village, south of the city, and abducted a former political prisoner, identified as Ali Bassam Ateyyani, 22.