Army Injures Many Palestinians In al-Mughayyir Near Ramallah 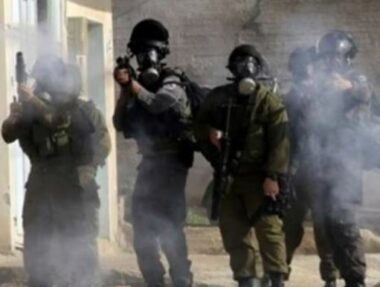 Israeli soldiers attacked, Friday, dozens of nonviolent Palestinian protesters in the al-Mughayyir Palestinian village, northeast of the central West Bank city of Ramallah. The residents were protesting the illegal annexation of their lands and the installation of a colonialist outpost.

Waleed Assaf, the head of the Wall and Colonization Resistance Commission, stated that the Palestinians marched from the center of the village before heading to its main entrance, while chanting against the illegal Israeli occupation, constant violations, and colonialist activities.

Assaf added that the army fired several live rounds, rubber-coated steel bullets, gas bombs and concussion grenades at the protesters, while a few protesters hurled stones at the soldiers who attacked their protest.

Many Palestinians suffered the effects of teargas inhalation, while several others sustained cuts and bruises, before receiving the needed treatment by local medics. The soldiers also abducted one Palestinian and took him to an unknown destination.

It is worth mentioning that the Palestinians were also marking the sixth anniversary of the death of government minister, Ziad Abu Ein, who was killed by the army during a nonviolent procession, and in condemnation of the killing of Ali Ayman Abu Alia, 15, from al-Mughayyir, who was shot by the soldiers on December 4, 2020.

Assaf said the Palestinians are determined to continue their protests until the removal of the illegal outpost, and will not the continued theft of their lands.

It is worth mentioning that al-Mughayyir is subject to constant Israeli violations, including escalating attacks by the illegal colonists, especially in Ein Samia and Marj ath-Thahab areas.

Israel is also planning a new illegal colony on Palestinian lands in owned by Palestinian from Kafr Malik village and al-Mughayyir.