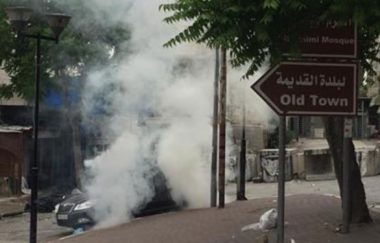 Israeli soldiers injured, Friday, many Palestinians in the center of Hebron, in the southern part of the occupied West Bank.

Media sources in Hebron said hundreds of Palestinians nonviolently marched in the city, condemning and rejecting the illegal policies of both Israel and the United States, the ongoing military occupation and the so-called “Deal of the Century.”

They added that the army resorted to the excessive use of force against the nonviolent protesters and fired gas bombs and concussion grenades at them.

The so-called “Deal of the Century,” announced by U.S. President Donald Trump, and his illegal recognition of occupied Jerusalem as the “unified capital of Israel,” are blatant and serious violations of International Law, the Fourth Geneva Conventions, and numerous United Nations resolutions.

Such policies ignore and deny basic Palestinian rights, including the internationally guaranteed Right of Return of the Palestinian refugees, the right to independence and sovereignty on Palestinian national soil, and remove occupied Jerusalem, the core of this ongoing conflict, from any political solution.

They also aim at “legalizing” Israel’s colonies in the occupied West Bank, including in and around Jerusalem, despite the fact that the colonies violate International Law and the Fourth Geneva Convention.