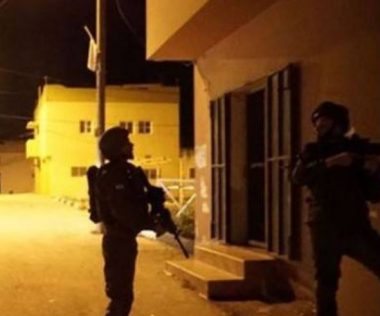 Several armored Israeli military jeeps invaded, on Thursday at dawn, the al-Lubban ash-Sharqiya village, south of the northern West Bank city of Nablus, and fired dozens of gas bombs, causing scores of Palestinians to suffer the effects of teargas inhalation.

The invasion started approximately at 2 after midnight, before the soldiers hurled many sound bombs and concussion grenades, at a group of Palestinian youngsters cleaning the streets of their town’s center, in preparation for al-Fitr Muslim feast, which marks the end of the Holy Month of Ramadan.

The soldiers fired many gas bombs at the Palestinians, and many surrounding homes, causing dozens of Palestinians to suffer the effects of teargas inhalation.

In addition, the soldiers surrounded the Old Mosque in the village, where dozens of residents were praying.

The Palestinian Red Crescent Society said the Israeli gas bombs caused dozens of residents, especially children and the elderly, to suffer the severe effects of teargas inhalation, before three ambulances rushed to the town.

Medics provided the needed treatment to the wounded Palestinians, and moved two of them to Yasser Arafat Hospital, in Salfit.

The invasion lasted for about two hours, during which the soldiers also broke into and ransacked many homes and interrogated several Palestinians while inspecting their ID cards.

In related news, the soldiers abducted two young Palestinian men from ‘Aida refugee camp, north of Bethlehem, and one in Nur Shams refugee camp, east of Tulkarem, after searching their homes.