Army Injures Six Palestinians, Including One Who Suffered Eye Injury, In Jerusalem 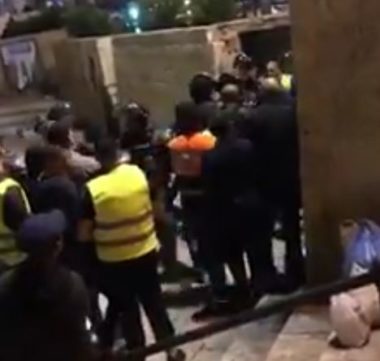 The Palestinian Red Crescent Society (PRCS) has reported that Israeli soldiers shot, on Thursday evening, six young Palestinian men with rubber-coated steel bullets and concussion grenades, including one who suffered an eye injury.

The PRCS stated that its medics provided treatment to six Palestinians, including four who were rushed to hospitals in the occupied city.

It added that one of the wounded Palestinians was shot with a rubber-coated steel bullet in his eye, another with a similar bullet in his leg, and one in the shoulder, in addition to fourth Palestinian who suffered burns from the concussion grenades.

Two other Palestinians suffered cuts and bruises, and received the needed treatment by Red Crescent medics.

The soldiers also stopped and searched many young men, and interrogated them while inspecting their ID cards.

The incidents took place after the soldiers assaulted many Palestinians who were sitting in Bab al-Amoud area following evening prayers at the Al-Aqsa Mosque, and forcibly removed them.