P.A: “Deal Of The Century; An Official American Recognition of Israeli Apartheid In Palestine” 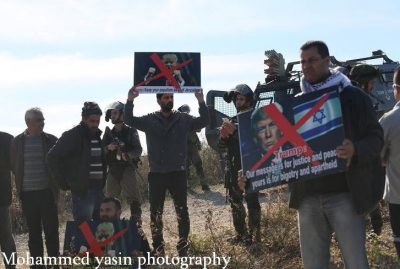 The Palestinian Foreign Ministry issued a statement, Thursday, denouncing the so-called “Deal of the Century,” proposed by U.S. President Donald Trump, and stated that this “deal” is an official American recognition, and sponsorship of Israel’s illegal colonization and apartheid in occupied Palestine.

In its statement, the Foreign Ministry said the American statements, and the unconditional support for Israel, and now the so-called “Deal of the Century,” are just providing Israel, and its ruling right-wing extremist parties, with more support to illegally occupy and annex more Palestinian lands.

“The United States is destroying and stepping on the legitimate demands of the Palestinian people, their hopes and aspiration to live in their own independent, sovereign state,” the Foreign Ministry said, “The American ‘Deal’ is an attempt to pressure the Palestinians into accepting the illegal colonization of their homeland, and is granting Israel more green lights to illegally grab more Palestinian lands for its colonies.”

The Ministry also said that this deal is nothing but another colonialist expansionist project that the U.S. is trying to force the Palestinians to accept, by trying to give them some economic incentives and limited civil rights, instead of achieving their internationally guaranteed rights of liberty and independence.

“The declarations and statements of Trump and his team, and the latest leaked information about his so-called Deal of the Century, are nothing but an attempt to legalize and recognize Israel’s apartheid,” the Ministry added, “Trump is just abiding by what the extreme ruling right-wing in Israel is dictating to him; he is implementing Israel’s fanatic and racist ideology.”