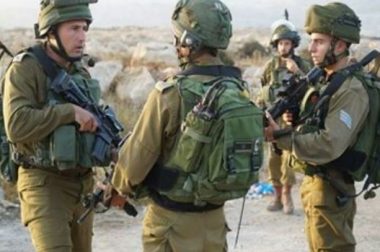 As’ad Hantouli, the Mayor of Sielet ath-Thaher, told the WAFA Palestinian News Agency, that dozens of soldiers invaded the town, before storming into the homes and stores.

Hantouli added that the invasions and searches were mainly carried out in properties on the main street on the town, where the soldiers also interrogated many Palestinians while examining their ID cards.

Furthermore, the Israeli siege on Hizma town northeast of occupied Jerusalem, continued for the third consecutive day, after the soldiers installed military roadblock, and placed concrete blocks on the town’s entrances.