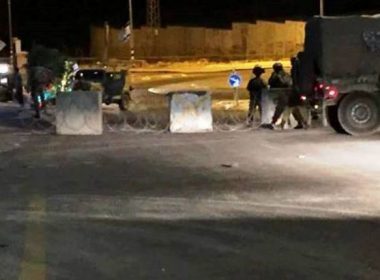 The Israeli siege on Hizma town, northeast of occupied Jerusalem, continued for the third consecutive day, after the soldiers installed military roadblock, and placed concrete blocks on the town’s entrances.

Media sources in Jerusalem said the soldiers are carrying out constant invasions, and violent searches of homes and property in the town.

Many local youngsters hurled stones and empty bottles at the invading armored military vehicles, and jeeps.

It is worth mentioning that the army imposed a strict siege on the town as an act of illegal collective punishment, after some youngsters hurled stones at an Israeli colony’s bus, near Hizma.

In related news, dozens of soldiers accompanied a group of extremist Israeli colonists into the courtyards of the Al-Aqsa Mosque, in occupied East Jerusalem, Sunday, and conducted provocative tours, before abducting a guard of the holy site.