Army Invades Many Apartments In Ramallah 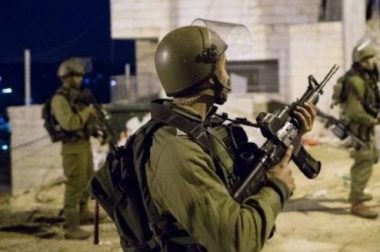 Israeli soldiers invaded, on Tuesday at dawn, many Palestinian apartments, including one inhabited by a journalist, and conducted violent searches, causing serious property damage.

The Palestinian News Agency (WAFA) said the soldiers invaded the apartment of one of its reporters, identified as Zahran Hammad, after detonating the front door.

It added that the soldiers violently searched the property, causing Hammad’s children to suffer anxiety attacks, after the army detonated the main door, and stormed into the apartment, including their rooms.

In related news, dozens of soldiers invaded Hebron city, in southern West Bank, before breaking into the home of a former political prisoner, identified as Jamal Karama, and summoned him for interrogation in Etzion military base, north of Hebron.

The soldiers also invaded the al-‘Arroub refugee camp, north of Hebron, and searched the home of Mohammad Issa Abu Afifa, whose son was abducted two days ago.