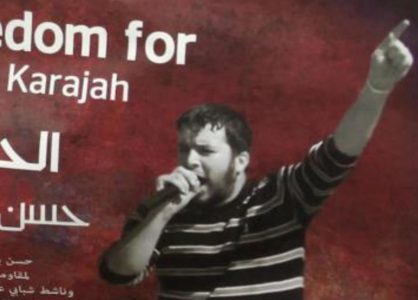 Israeli soldiers kidnapped, on Tuesday afternoon, a nonviolent Palestinian activist after stopping him at a military roadblock, west of the central West Bank city of Ramallah. The Palestinian, also a former political

The Palestinian, also a former political prisoner, is the coordinator of the Popular Committee against the Wall and Colonies.

The soldiers stopped Hasan Karajah, 35, at a military roadblock near Beit ‘Or al-Fouqa village, west of the central West Bank city of Ramallah, and kidnapped him.

Mohannad Karajah, a lawyer with the Ad-Dameer Prisoner Support and Human Rights Association, said the abduction is part of Israel’s campaign against human rights defenders and civil society activists, as the Israeli occupation authorities accuse them of incitement.

Karajah called on legal and human rights organizations to organize protests, in participation with international solidarity activists and legal groups, to pressure Israel into stopping its violations, release Karajah and all political prisoners.

The abduction came after Israel’s Defense Minister Avigdor Lieberman accused nonviolent Palestinian civil-society activists and human rights defenders of “incitement against Israel,” for their activities and ongoing nonviolent protest against the occupation, its colonies, and the Annexation Wall.

It was worth mentioning that Karajah was first kidnapped by the army on January 23, 2013, and was released on October 19, 2014. He is known for his social and civil-society activities in Palestine and various Arab countries.

When he was kidnapped in 2013, dozens of soldiers stormed the family home, and forced all males in one room, and the females in another, and violently searched the property for more than three hours, causing excessive damage, in addition to photographing family documents, pictures, and honorary plaques.