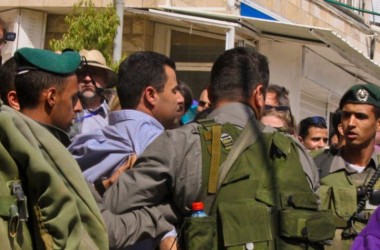 Coordinator of the Popular Committee against the Wall and Settlements in Hebron, Mohammad Awad, said the soldiers stopped Khalil Odah al-‘Allami, 16, at a military roadblock near the main entrance of the town, before kidnapping him.

Awad added that the soldiers also stopped and searched many Palestinian cars, and assaulted Raed Ahmad ‘Aadi, 40, causing various cuts and bruises, before detained him.

The soldiers later allowed Red Crescent medics to move ‘Aadi to a Palestinian hospital in Hebron.

In related news, five residents were injured, on Thursday evening, and many others fired the effects of tear gas inhalation, after Israeli soldiers invaded the al-Arroub refugee camp, north of Hebron.