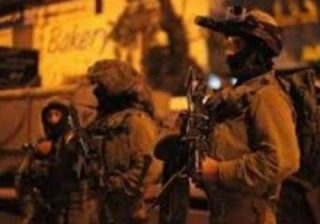 The Palestinian Prisoners Society (PPS) has reported that the soldiers kidnapped Abdul-Rahman Mustafa Hamed, 34, who previously spent six years in Israeli prisons, Abdul-Rahim Bassam Hamma, 19, who just less than a month ago was released after spending three months under Administrative Detention, and Ibrahim Mohammad Hamed, 32.

The soldiers violently searched the homes of the kidnapped Palestinians and interrogating them for several hours prior to abducting them.

It is worth mentioning that Abdul-Rahim is the brother of Anas Hammad, who was killed by the Israeli army on December 4th 2015.

Also at dawn, several Israeli military jeeps invaded the town of Teqoua’, east of the West Bank city of Bethlehem, kidnapped three young Palestinian men and summoned another for interrogation.