Army Summons Four Palestinians For Interrogation In Jenin And Bethlehem 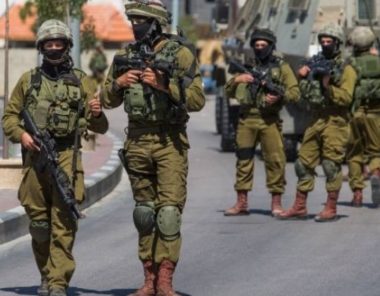 Israeli soldiers invaded, on Saturday at dawn, many homes in Jenin and Bethlehem, in the occupied West Bank, and searched them before summing for Palestinians for interrogation.

Media sources in Jenin, in northern West Bank, said the soldiers summoned Ahmad Husam Touqan, and his brother, Mo’men for interrogation in Salem military base, west of the city.

They added that the soldiers violently searched homes, and briefly detained the two, but released them, after ordering them to head to the base, for interrogation.

In addition, the soldiers invaded Rommana village, west of Jenin, installed a military roadblock, and interrogated many Palestinians, while searching them while examining their ID cards.

The soldiers also installed a roadblock at the Jenin-Nablus road, near Jaba’ town, and searched many cars while interrogating the passengers.

It is worth mentioning that, on Friday, the soldiers invaded the home of Waqas Jarrar, in Wad Burqin area, west of Jenin, and interrogated the family; Ahmad is the cousin of Ahmad Ismail Jarrar, who was killed by the soldiers two days ago.