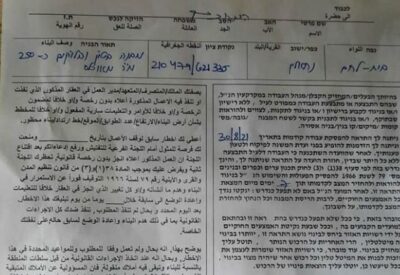 Issam Samrat, the secretary of the Fateh movement in Jericho, said the seven Palestinians own the recently constructed homes on privately-owned lands.

Four of the homeowners have been identified are Raed Samrat, Arafat Mleihat, his brother Hisham, and Maher Qonbar.

Five days ago, the soldiers invaded the same area and handed one home a demolition order. The invasion came just a day after the army issued demolition orders against twenty Palestinian homes in the village.

Ein ad-Dyouk, to the northern of Noweima and ad-Douka al-Foqa villages, west of Jericho, is inhabited by about 1300 Palestinians, mainly farmers.